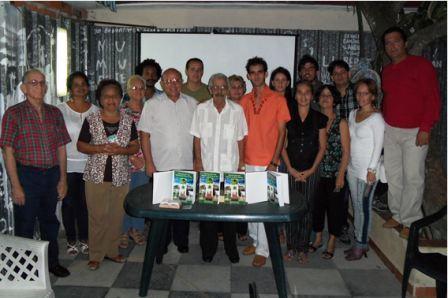 “Notes for a History of Pinar del Rio” is now, after the hard work of almost five years in the hands of reviewers and a reward to Wilfredo Denie Valdés for the work of his lifetime, a gift for all natives of Pinar del Rio on the island and in the world. Under the label of Coexistence Editions (which adds another three titles: “Draft economic thought for the future of Cuba” -2008, “Cuba: Time to raise its head” -2009, “Anthropological damage and human rights in Cuba” – 2009) appears this new way of building bridges of history, to fill gaps despite the distances, to chase away forgetting with the remembrance of places lost to the mind, but resuscitated in sight with just the contemplation of a broken image in the recesses of our existence. It is the humble contribution of these sons of alligator’s tail, weaving coexistence between the two shores, to intensify the Cuban identity and fulfill the legacy of Blessed John Paul II who, flying over our Diocese on January 21, 1998, said about the wealth of spiritual values, “We are called to preserve and transmit to future generations for the good and progress of the nation.“

On Thursday, November 1 at seven in the evening it was presented in conjunction with Casa Bacardi, the Institute for Cubans and Cuban-Americans, University of Miami, by the Pinar del Rio in the Diaspora and by the wall of Coexistence in Pinar del Rio, by those from Pinar del Rio who worked on the design and realization of the book, its author and some guests. In Miami the panel included Dr. Omar Vento as moderator, and panelists Marcos Antonio Ramos, PhD in History and Theology, Wilfredo Cancio Isla, PhD in Information Sciences, and Belisario Pi Lago, poet, essayist and professor from Pinar del Rio , founder of the magazine Coexistence (www.convivenciacuba.es)

Wilfredo Denie, author of such a precious jewel, very excited at 86 years, offered a special thanks to all who made this history of our beloved province see the light. Everyone in Pinar del Rio expressed their thanks and congratulations for a well-deserved and needed work.

Today we have a detailed view of Pinar del Rio that puts in the hands of the reader more than 200 articles, 170 images and 70 tables. A small contribution of the children of the westernmost province of Cuba, an offering to the hometown and an example of how much can be done to rescue our roots, the defense of our identity and the reconstruction of Cuba, from civil society.