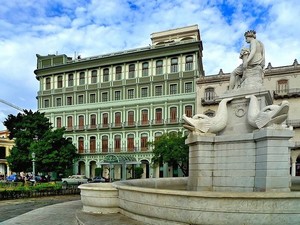 In spite of the decay and the grime, it is still a vain city. A varied architecture, rows of archways and tall columns topped with plaster figures. Neighborhoods with their own flavor.Atarés, El Pilar, Carraguao, La Víbora, Lawton, Sevillano, Mantilla, Párraga, Buena Vista, Pogolotti, San Leopoldo, Colón, Cayo Hueso, El Vedado o Miramar. Each with its own contrasts.

For a true Habanero there is no better baseball team than the Industriales. Nor a seaside drive more spectacular. Nor a view more beautiful than from the other side of the bay. The neglect and indolence have not prevented Havana from being a unique metropolis.

It is true that it is a city of first-world prices and a fourth-world infrastructure. Poverty-level salaries. Devastated sites. Streets filled with potholes whose broken pipes spew water in torrents. Houses that scream out for extensive repairs. Neighborhood movie houses where we first saw Charlie Chaplin now converted into state-run grocery stores, bicycle storage areas or places where couples go to have sex among the debris.

Everyday in underground Havana a new jargon, incomprehensible to the rest of the world’s Spanish speakers, is invented. And on the black market you can get a pound of beef for 2.50 CUC. Shrimp for 60 pesos. Apparently, the real Havana is not what we see in newscasts or in the headlines of the official media.

The real Havana is the one with people who live off profit and invention. Where objects never die. Like the old cars made in the United States in the 1940s and 1950s. Thanks to Havana ingenuity they are still running. A Chevrolet with a Hyundai engine from South Korea, a gearbox from Germany and brake pads from Italy.

In the rooms of countless homes furniture from the mid-twentieth century that belonged to our parents and grandparents is still used. Cribs, playpens and highchairs are passed down from one generation to the next.

Nothing is impossible in Havana. Not even snow or dinosaurs. Everything can be gotten under the table. Colombian cocaine, pure or adulterated. Marijuana grown in Guantanamo. Bottles of Santiago and Caney rum that leave through the back door of the old Bacardi factory and are sold at half price. Mobile phones like iPhone and Samsung Galaxy. Apple laptops and tablets. High-definition Sony TVs. Xbox video games. Converse, Nike and New Balance shoes. Guess jeans and denim jackets from Levi’s.

In spite of a strict embargo, there are hard-currency stores selling products stamped “Made in USA” that range from California apples to Coca Cola. All this and more makes its way from Gringoland and is for sale in houses whose residents have set up sumptuous illegal stores.

In Jesús María’s tenement flat you can also get powdered milk imported from Brazil for 40 pesos a pound. Hams stolen from Suchel. Homemade ham. Viagra. Vitamin C from a pharmacy in Hialeah and two Hershey bars.

On the weekends, when night falls, other things become available. Discotheques with a 10 CUC cover and a trendy reggaeton musician. Discotheques with a 2 CUC cover where, amid the Cristal beer and bolero music, middle-aged men and women pass the time. The park on G Street, a hangout for emos, mikis, repas and roqueros,* is free.

The all-night discos are in the poor neighborhoods. Outside, with their exotic hairstyles, young men hide their arsenal in the vegetation. It includes hundred-year-old Colt revolvers, pistols, knives, razors and pick axes. Not infrequently, the parties end with people mutilated and someone dead.

If you have enough money and want a busy night, there are girls for all tastes and price ranges. Stunning lesbians for 25 convertible pesos the pair. Mulatas to take your breath away for 20. Blondes for 10. Adolescents recently arrived by train from Bayamo for 5.

On a stretch of the Malecón you can hook up with a homosexual. On a corner of La Víbora a lineup of transvestites prostitute themselves for hard currency.

Havana does not have skyscrapers like New York. Nor an Eiffel Tower like Paris. But it does have the Fountain of the Indian in Brotherhood Park near the National Capitol, a meeting point for Cubans and foreigners. Unlike Juárez or Caracas you can walk all night through Havana’s streets. Your life will not be in danger if you cross paths with a thief.

In twenty years perhaps the capital of Cuba will be much better. If the winds of democracy blow through these hearths and an intelligent vision revives it, we will have the Havana we all desire. Until then, we must wait.

Photo from Cuban Screen. The Hotel Saratoga with the Fountain of the Indian (or Fountain of Noble Havana) in the foreground. It was created in the neo-classical style in 1837 by Italian sculptor Giuseppe Gaggiani. Originally located at the end of Paseo del Prado, it was moved in 1863 to Isabel II Park, now Central Park. In 1875 it was moved to its current site, looking east. With the inauguration of Brotherhood Park in 1928, it was left in the same location, but turned to face north. Historians claim it was the first image of Havana to be photographed, the photo taken by a Frenchman, Antonio Rezzonico, in the 19th century.

According to legend, when Spaniards arrived at the port of Havana in 1519, they saw an Indian woman seated on an enormous rock, looking on in silence. She later cautiously approached them and spoke the word jabana. It is said that one of the sailors drew an outline of the Indian on the rock and called her “La Habana.”

Sculpted from white Carrara marble, it is three meters high and it sits on a square pedestal with four dolphins, one at each corner, whose mouths spout water onto enormous shells which forms its base. Named Guara, the woman is the wife of the Indian chief, Habaguanex. She wears a crown of feathers on her head and a quiver of hunting arrows over her shoulder. In her left hand she holds a horn of plenty filled with Cuban fruits and in her right the coat of arms of the city of Havana. (TQ, with internet sources.)