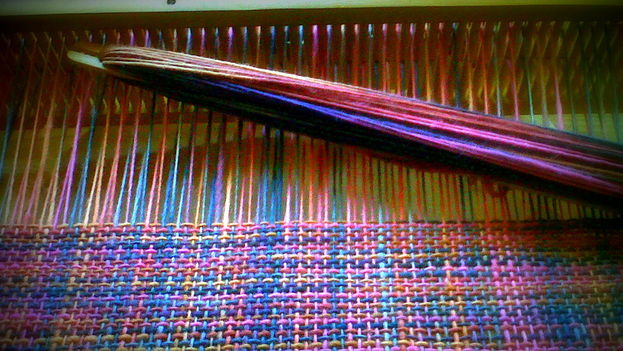 14ymedio, Yoani Sanchez, Havana, 26 March 2015 – The family of Yamila, age 41, is a sample of Cuban society. The father is a member of the Communist Party, the mother a Catholic who never embraced the Revolutionary Process, there is a brother in Miami and she herself is working for a joint venture where she earns convertible pesos. When they sit down to eat, they discuss the high price of food, the low salaries, how boring the telenovela is, or how late the remittances from the emigrants are this month.

For decades the ideological fire has stirred no passions in Yamila’s living room. The father is increasingly tempered in his political views; the mother prays, while buying in the illegal market; the relative who lives on the other shore and comes every now and then on vacation is an obliging forty-something who saves every cent to bring them a flat screen TV. These are the daily problems that concern them and hold them together. The struggle to survive makes them set aside any differences.

This microcosm of the Cuban family today has a lot to teach those who, from polarized positions, try to say what civil society is and isn’t, try to put limits and Manichean labels on the diversity of phenomena that make up our reality. Any definition of the framework of this complex tapestry that makes up a society should be constructed with the objective of recognizing all of its parts and the right of each to exist.

Branding some as regime supporters and others as traitors only deepens the social distances and delays the necessary transformation that this country needs to experience.

Branding some as regime supporters and others as traitors only deepens the social distances and delays the necessary transformation that this country needs to experience. In the current social fabric there are identifiable strands that have to be considered and that no snip of intolerance should exclude. If we are aware of our responsibility in this process of inclusion, then we will try not to arbitrarily cut off any part of the fabric.

The issue heats up as we approach the Americas Summit in Panama, where both the Government and the opposition are ready to present their own versions of Cuban civil society. All indications are that, despite conciliatory longings on the part of the Panamanian organizers, this platform is only going to hear a skewed version from each side, not the so necessary discourse of respect for the other and for plurality that the Cuban nation needs at this moment.

While it is true that the so-called mass organizations such as the Federation of Cuban Women (FMC), the National Association of Small Farmers (ANAP) and the Committees for the Defense of the Revolution (CDR) behave in the ideological arena like transmission poles from the powers-that-be, it also needs to be borne in mind that each of them encompasses a large number of Cubans – whether as an automatic response, the inability to choose other options, fear, or true complacency – and every one of our families is made up, for the most part, by members of these organizations. To ignore them is to amputate a part of our reality.

To disqualify, per se, a person because they are a part of the FMC, the CDR or the ANAP, for example, becomes an act of sectarianism and eliminates from the national discussion an essential area of the citizenry. Among them are some very capable people from the professional point of view, who will be part of those supporting the economic, social and legal reconstruction of Cuba. Many of them will be at the Panama Summit – subsidized by the Cuban Government and chosen for ideological reasons – with proposals that should be heard.

Panama could be the moment when Cuban civil society meets and understands that no child of this land should be excluded from the national debate.

Sociologists, economists, intellectuals and Cuban academics will bring solidly supported studies that address the core theme of the meeting: Prosperity with Equity: The challenge of cooperation in the Americas. Instead of rejecting them because they come with directives to convert the event into trench warfare, it would be very healthy to interact with them and their proposals with respect. Panama could be the moment when Cuban civil society meets and understands that no child of this land should be excluded from the national debate.

On the other hand, the Cuban government official campaign has already begun to vent its venom on dissident figures and groups, the opposition and independent journalism which will also attend the event in April. Those attacks are not directed at damaging the self-esteem of the activists, already used to the verbal violence constantly directed at them, but rather to avoid any possible dialogue between this part of our civil society with that part recognized as closest to the Government, the one that defends the current state of affairs on the island.

Non-government attendees will travel, for the most part, with tickets and accommodation paid for by foreign institutions and entities, given the material poverty they experience from their situation of illegality. However, the selection process for those who will attend, incarnated that part of Cuba that has lacked internal democracy and a necessary transparency. Driven by improvisation and material precariousness, these representative should know that they will also be evaluated for the ideas and proposals they bring, not just for anecdotes about the pain and repression they have experienced.

If the dissidence wants to show its adulthood, it must communicate in Panama that it has a plan for the future and not only that it knows who to survive under the heroic status of being a persecuted group

If the dissidence wants to show its adulthood, it must communicate in Panama that it has a plan for the future and not only that it knows who to survive under the heroic status of being a persecuted group, but also that it knows how to engage in politics in an intelligent, measured and thoughtful way for the wellbeing of all Cubans. Its agenda should include not only calls for respect for human rights and a framework for individual and collective freedoms, but must also address the most pressing everyday problems of the citizens they want to represent.

It is also important for this other share of Cuban civil society that does not feel recognized in the mass organizations, nor in the opposition parties, understand that their role is to be a bridge, not an island. Pointing fingers at both sides from the moral stature of those who are neither “subsidized by the Cuban Government” nor “employees of the empire,” only adds more fuel to the fire of distrust.

The small private sector that is trying to prosper on the island, the sectors tied to the Catholic Church and other denominations, the academics who have tried at all costs to maintain an independent view in their analysis, and those groups who defend the rights of minorities, working for female emancipation, independence for artists and filmmakers, or an end to racial discrimination, all should know that it is not helpful to sit on the fence watching the confrontation between the two poles. They have a responsibility to modulate and form a part of the tapestry, not snip away at it or remain outside the conflict.

At Yamila’s dinner table everyone wants to live his or her life, have his or her own autonomy. They have managed it, in the shelter of their home and the understanding that comes from family ties. Can we reach it as a nation?