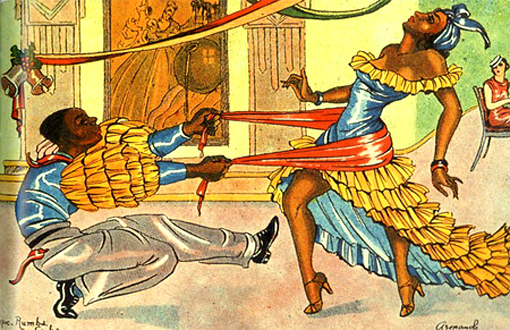 The diplomacy of the absurd. A kind of indecipherable political cha cha cha, with steps lacking any harmony with each other, forming no coherent dance. The thinking of the top leadership in Cuba is an unfathomable mystery to me, every day more difficult to understand. I have come to think: Not even the powers-that-be are interested in reality. What interest them, as a delicious Creolism says, is to fuck.

What’s in the scales? On one side we have the release of 126 political prisoners, some deported to Spain, others living today in their houses. How nice. And then, on the other side, we have the recent savage kickings of dissidents, the beating of women, the tear gas used on protesters who, from a doorway of Palma Soriana, demanded freedom.

Do the scales tip to either side, are they anything but horizontal? Decidedly not. Any effect desired from the release of the opponents, in the political chess game, is annulled under the weight of the repression of today. This, in diplomatic matters, is laughable insanity.

Let us tip the scales once again: On one side we’ll put the calls of Raul Castro who, either he is a major player, or he delivers his speeches under the influence of his beloved alcohol, or he really wants Cubans to begin to speak without fear, or to show their disagreements in public meetings and forums. I’ve heard it more times in the last five years than from his brother in 50. A show of openness? Could be. But why? Why do they need it, want it? Apparent democracy for whom?

Any rational is left with no vitality when later, from the hand of this call for supposed sincerity, we put on the other side of the scales a cultural icon like Pable Milanes who, expressing his discontent, his urgent desires for social reforms, and a digital posse, blog soldiers, Silvios and Edmundos, knives between their teeth, launch their attack against him.

Elementary conclusion for Cuban brains? If an untouchable like Pablo gets such a response on the part of the establishment, totally discrediting him (or is there anyone who doubts that when Silvio Rodriguez, Edmundo Garcia, or digital soldiers like Enrique Ubieta or Iroel Sanchez speak, they are simple transmitters of the official posture?); if this is what happens to an emblem like Pablo, what can common and hungry mortals expect?

Last but not least: Let us set on the scales the recent words of Raul Castro announcing changes in national immigration policy, stripping from the majority of exiles the unjust designation of enemies. We will add, also, the visible advances in tolerance for sexual and religious diversity, a point even Secretary of State Hillary Clinton recognized, on presenting her annual report on religious freedom in the world. (Clinton said that, although Cuban was still one of the countries most criticized in previous reports, with respect to religious freedom its practices had improved.)

But then, rampant and dissonant, we rebalance the scales at a stalemate, with the rejection of former Gov. Bill Richardson who did not return home with the contractor Alan Gross on his plane, nor was Richardson even able to visit Gross. In the past, Richardson has been an active advocate of normalizing certain points of diplomatic relations with Cuba, and he confesses that the release of extremely ill Gross, who has lost over 100 pounds, would have served to open large areas of negotiation. (More to the favor of the Cuban government: to free a man so affected as Alan Gross would not have been seen as a symptom of political weakness, but as a distinguished act of humanity.)

What is the diplomatic move of the same establishment that cordially invited Richardson to the Island? Treating him to an ass-kicking. Absolutely refusing him an interview with Alan Gross. Managing that the former Democratic governor would say that too many people in the cabinet don’t want to normalize any bilateral situation, and insinuating, frustratedly, that in these negotiations Cuba had lost a friend.

And above all, the icing on the cake: the mummified leaders decided to send their fundamental backing to the politics of those such as Mario Díaz-Balart, David Rivera and company, in their effort to provide cement for the 35,000 schools Obama wants to reconstruct, to create more walls of estrangement between the two shores.

Placing pieces on the board: Where is this deranged ship that is my country headed? I declare myself incapable of discerning it. I don’t understand.

If the intention is to maintain a tight grip, if the intention is to die victims of biology (today Vilma Espin, tomorrow Juan Almeida, previously Julio Casas Regueiro) without changing anything in the landscape, why so much interest in reform? In decentralizing the economy? In allowing the sale of cars and houses, announcing supposed immigration changes, emptying the jails of political prisoners, inviting Jimmy Carter and Bill Richardson?

If the intention is to mount a backchannel lobbying, feigning rigidity in public while speaking candidly to the enemy in the shadows, why so many beatings, so many arrests, so much incendiary verbiage against Pablo Milanes, and now, so much unnecessary and prejudicial theater like that shown against the Democrat Richardson?

I don’t believe one step forward one step back that is staged every day in Cuban politics has much to do with the indecision of the fearful or the doubtful. What’s more, I don’t believe there is another politics in the world that exhibits more scandalously the incorrigible senility of its sponsors and executors.