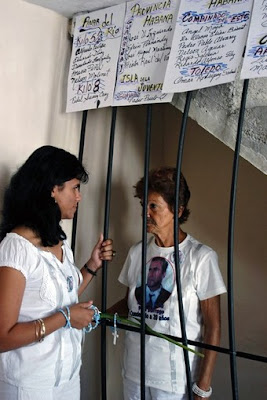 – When did you decide to follow the fate of Horacio and move out of Ciego de Avila to Pinar del Rio?

It was difficult to get them to give me authorization, me being a doctor, to go visit Horacio after they transferred him. We intended to make the relationship work and so I had to move there. Also, I couldn’t keep up the pace of the visits from Ciego de Avila.

I have been living here in Pinar del Rio for four years with no one, only his family and the friends I’ve made since I came. The families of the other prisoners supported me, for example I would stay in the house of the family of Victor Rolando Arroyo when I came on the visits.

It was hard to separate from my family, I never dreamed of living in Pinar del Rio and look, here I am. Then my mother-in-law died, which was a very hard blow for Horacio and for me. She helped me with everything, she died March 2, 2008, of cancer.

I was very lonely but months later God gave me the gift of becoming pregnant and now I have a daughter of 15 months; we named her after Horacio’s mother: Ada Maria, she’s the youngest little Lady in White.

Despite everything I think we are happy, despite being separated we have a lot: a family on a sound footing. We, Horacio and I, have always had a great deal of faith, and at times — my mother also tells me this — I feel as if it were a mission, that only God knows why he does things.

I can’t say it is completely happy, having him in prison is very hard; we are all prisoners, we have no life. I take my daughter to all the visits, she plays for two hours and on leaving him she cries. For us as parents, also, it’s very difficult, he has missed so much: her first steps, her first words. We miss having Horacio very much, as do his children and their spouses. We hope that everything will be solved and we can live as a family, as the real family that we are.

– Are you still practicing as a doctor in Pinar del Rio? 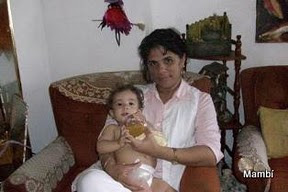 I finished my social service and I continue working here, the move was difficult, at first no one wanted to give me a position. My career is very practical and I always want to work. State Security made sure that my position here in Pinar del Rio was very far away, there wasn’t even a road, I had to get there in a horse cart, and I was there for six or eight months. When I was pregnant I had to travel by wagon with my big belly, coming and going every workday.

Eventually I approached the town and then the municipality, but with all that I’m still very far out. In my work I’m assigned to the municipality of Sandino, about twenty miles from where Horacio’s family lives.

They gave me a job, but they have never made things easy for me. A doctor friend told me when I arrived, “Are you prepared for how you will live? I’m convinced you can’t even imagine how things are going to be for you.” And it’s true, very difficult things have happened, when I got pregnant it was even worse, with a huge belly for six, seven months, going alone to the prison, arriving with three or four suitcases of things for Horacio and the officers weighing them so they can start removing things. All of the prisoners’ families live through this, but looking at my story in particular and what they have done, there is cruelty.

– Do you have any special moment you would like to tell me about, something that has been marked you as a couple?

We have had very hard times but also very beautiful times in our relationship. I can’t deny that at times we’ve fallen, like everyone else, but we are always able to pick ourselves up and the proof is this: today we are together, after nearly seven years in a relationship, we are more united than ever, and that’s the truth.

There is a story that marks us — it’s even amusing — at times a person from outside hears it and it seems normal, but for us it has a great deal of significance: Once I was looking after a prisoner and Horacio called me to attend to him. I thought he felt bad, I was worried because I thought it was serious. It happened that I was examining other prisoners — the doctor in the prison usually goes in and examines the prisoners in the same cell — and the guard forgot about me and left me alone with the inmates. Horacio was calling and calling me, and suddenly he was at my side and without thinking he gave me a hug as if he wanted to say that no one could touch me. When I realized what was happening it frightened me. Afterwards we laughed and I asked him, “What were you thinking?!”  What he hit on was to hug me before the whole world!

– When did you get married?

We were married on March 21, 2007, the wedding was in the prison, a very simple thing: we brought a notary, signed. Perhaps one day we will celebrate our union in a better way with our family. Horacio has three daughters, the oldest is 22 and is very attached to us, she was 16 when her father was convicted.

Perhaps we’ve managed to achieve things other couples living together don’t manage, I daresay there are married couples in the street, you see it every day, who do not have what we have. This is not an heroic act of mine: Horacio is worth all this sacrifice, he inspires me to do all of this.

– What do you think of the negotiations taking place now between the government and the Catholic Church?

It is very difficult to have a daughter alone, to see how this baby walks, talks and grows without being able to see her papa, to see how she cries every time we leave him. It’s very hard to see him turn his back and know that he is enclosed behind a fence, to not know if he’s eating, if he’s going to be fine. Then, as long as it doesn’t go against our principles, I’m infinitely thankful for everything that is being done to free him and all the prisoners.

There was a time in my life when there was no light, I lived to live and today I have the hope of being able to form a family, to give my daughter a stable home. Her father is irreplaceable, his place can’t be filled by anyone else, not by grandparents, by no one, then the possibility to live together, to have a normal live, as God wishes, it’s something I am very grateful for.