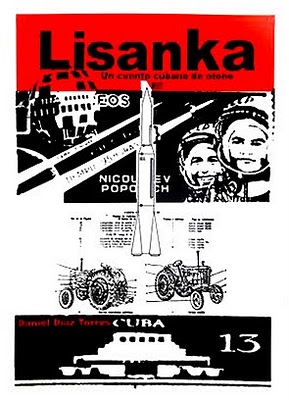 A friend, who is me, told me that he can’t stand to hear Cuban actors act. That there is a tone that precedes any school stage. Like the hollow echo of the test pattern on television. A debris of discourse: a cadence, a family resemblance, a certain inertial ineptitude. And I, who am my own friend, I can’t agree with him.

It’s not the fault of the actors, of course, although it is their fault. The genetic defect is the directors’, who left off thinking about Cuban art at least two decadent decades earlier. In particular, the film directors, like an accomplice social class.

Nor is it the directors’ fault, of course, even though it is their fault. The theatrical interconnection is the film institute’s, with its plastering aesthetic of the scripts for extra-cinematic reasons. Meanwhile more economic comfort, even worse. For Cuban film the crisis suits it, the scavenger’s freedom of the unofficial budget.

And now, once again, a fable in the key of the eighties. One of those imported comedies directed from early Titón, with a certain postmodern Patakín as added value.

They are all stereotypes there (they say the good comedies depend on this common ground). Dialogues that explain too much, or worse, the implausible or unbearable off-screen narration. Characters who say a lot and show little (prudish pornography), caricaturing the film’s plot as a kind of storyboard illustration. The kind of film that could be successfully shot by an apprentice director (his presence on the set is more a question of labor than authorship).

And, as a watermark, the pathetic patriotism dripping loudly despite the irreverent intention of a supposedly solemn historic moment: October 1962, an hysterical milestone and now soon, in August 2010, according to the atomic Reflections of Fidel Castro, what we will live again from the wall of Jerusalem to the synagogue of Havana (perhaps the reason being that the Yankee contractor is still in prison in Cuba, without charges, for repairing our rabbis’ antennas and laptops).

This delayed remake of “Alice in Wonderland” should not be criticized as a work of art, but as a systemic symptom of the paleoindustrial Cuban cinema. He could have spent millions in its making. It can work for a huge audience (although I noted no laughter in Acapulco). It could win rave reviews and a consolation prize from the European left or the Latin American ALBA. But all that paraphernalia, including this commentary, will be a better story when he’s finally given birth to the script, where to top it off there are literary narrators involved in its copyright.

The best thing, like in half of Cuban cinema, whether official or independent, is the special effect called Jorge Molima, who eats cabbages the same as worms as domino tiles who hunts Little Red Riding Hood in the cannibis gulag of San Antonio de los Banos. Even worse, that in the coming season we’ll have more and more of the same in the theater seats, as if Cuba continues frozen in an era capable of giving birth to a heart. As if thematically the 21st Century makes us panic as creators.

And I am not beating a dead rocket. I’m not even complaining. In any case, I’m licking everything with that friend of mine that I am myself.