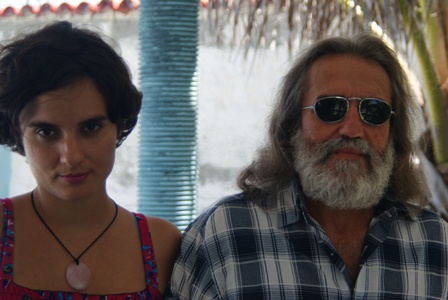 Yes, life seems a dream… I have had to name my universe and at birth there was already a language, a tradition, or more… I am in love with the first man of Creation, but that also is tradition. Becoming an idiot is not an option, an idiot like that movie: The Idiots, of the group Dogma.

How many times in my life have I believed I’ve loved with the same words I say to him? But I discover that for him the words have been rearranged, my breathing changed, and that changes everything. It is the kabbalah of our universe. We have to love this universe that we are creating in relation to everything else, filled with the eros of oneself. Sometimes I’ve cried but now I know I was crying for myself, for my fears, for the absence of my punitive mother, my Medea mother.

What a shame if he were to discover that I have barely a single virgin word to offer him. But he doesn’t understand me when I ask him to renounce the clichés on the periphery of his life, to renounce this promiscuity of words that serves all loves. I need the words for me alone, words surging from the pleasure, destroying the past, bringing me back to a kind of satori, samadhi, existential nirvana. Sufficient to renounce the known and enter into the realm of the unknown.

Language is the death of pleasure: having believed to understand something from that series of words whose reading is always personal was one of the great revelations of my life. Recognizing that I inhabit a country built on an ideology founded on words that with a resistant cynicism were declared to have the character of a “Battle of Ideas” fighting in the consciousness of each of us, lying about the meaning of good and evil. As if one could, pretending not be to an imposter, and when the need emerged, the duty to resist from one’s own faith and knowledge and conscience.

In any event I must be in love because it makes me want to reread this chapter of an almost forgotten novel (to be forgotten is the worst punishment for a novel) as if it had new clues.

Today rereading Rayuela has served to restore my serenity, despite Julio Córtazar’s limitations in warning of the evil time to come hanging over Cuba and generations of Cubans, and he lent his support to it to make it attractive and popular among the intelligentsia of his time. Fortunately the Revolutionary homunculous is going out of style.

I had to feel again the cold fear of being alone in a country where freedom of expression is a crime to again convince myself that as long as I have faith I can overcome all those fears and keep writing and living in Cuba as if I lived in a free country.

I am not totally asleep when he sleeps with me, it is like walking asleep, sleepwalking… Witch. By day I read images in strange figures that appear in the water that only I see on the kitchen floor. These images make me confident and touch the membrane that separates me from the other dimension of time and space. But the final ingredient of this new overabundance is to find Agustín still in my kitchen, in my bed.

He also takes care of me and likes my madness almost as much as me. His skin calms me, my skin calms me. Everything is simpler when he kisses me.

I realize I can never be alone, because there is a language and a tradution, a similarity, that has the character not of repetition but of assistance (almost like the glass of water os those who believe in spirits, but in reverse because it almost always comes from the submerged world) and the guajiro rescues me before I fall into the abyss.

*Translator’s note: This is an extract from Julio Cortázar’s novel Rayeula, which has been translated into English by Gregory Rabassa under the title “Hopscotch.” Liliane has omitted ellipses in her selection and Translating Cuba will not pretend to be able to match Rabassa’s translation.  Here is a fragment of that translation — cobbled together from pieces on the Internet — from the beginning of Liliane’s selection, showing the additional gaps in her text:

…passport love, love, masks, key love, love gun, love to give me the thousand eyes of Argus, the ubiquity, the root from which one might begin to weave a language … You get an idea from there, a feeling from the other shelf, you tie them together with the help of words, black bitches … [As if you could choose to] be in love, as if it were not a lightening bolt that splits your bones and leaves you staked out in the middle of the courtyard… the black bitches get their vengeance any way they can, they’re biting me from underneath the table. Do you say underneath or under? They bite you just the same.