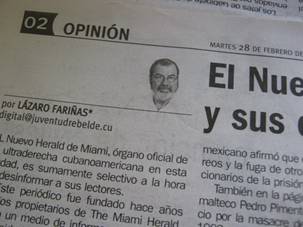 A Cuban journalist named Lazarus Fariñas, who regularly publishes articles on the second page of the Cuban newspaper Juventud Rebelde (Rebel Youth), where at the bottom it always says “Cuban journalist based in Miami.” He centers the content of his writings to try to prove to the Cubans here, that the bad Cubans are there, as if it were not enough already with what those based here write. He repeats every kind of government propaganda, seasoning it with anecdotes and gossip from the place where he lives, without worrying about coming to the attention of the authorities, who respond by organizing a “repudiation rally” of the “enraged people”, or by arresting you and making you spend hours or days at a police station. The advantages of living in democracy! 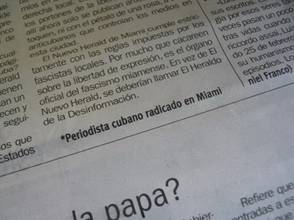 Not satisfied with what he writes and publishes here, he tries to publish there what happens in Cuba and affects Cubans, taking on a campaign of falsehoods and lies. Moreover, he accuses those who think differently and express it of being employees in the United States (nothing original in that), with a baseless and utter lack of shame. I imagine that, although very little (we are in crisis), Juventud Rebelde pays him something for his articles, which in fact means he is the one who is really an employee.

As, at the time of writing this nonsense, he seems to lack the sense of proportion, adding that there is not a single witness nor a single photograph of the Cuban authorities, suppressing peaceful protest or dissent, which, however, abound in countries like the States, Spain, Honduras, the European Union and others in the democratic world. Is this gentleman in Miami or in limbo?

If he had the audacity to access any of the many independent Cuban blogs (not just the government blogs), he would find more than enough evidence, photographs and sometimes even videos, that here, the employees without salaries from anyone, have the courage to place them on the Internet, facing the consequences of being located in Cuba.

This strange Cuban journalist based in Miami, adds nothing to the serious and responsible journalism, so necessary in these times. He is simply one among many of the ruling party hacks spread throughout the world.