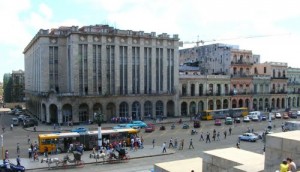 September 14, 2010 the jeweler and moneylender Humberto Gonzalez Otaño lived the last night of his life. He lived at No. 52 7th Street between 2nd and 4th, San Matías neighborhood, in San Miguel del Padrón, a town northwest of Havana.

Well into the night, at least two thieves used a wrench to break a small side window and entered the bathroom in the house.

They got into the bedroom of Gonzalez Otaño and his wife, Esther Fernandez Almeida. Knife in hand, they gagged and beat them, threatening them with death and pricking them with the tips of their weapons, getting Otaño to show them were he hid large amounts of money and valuable articles of gold valued at more than 200 thousand pesos.

The obese jeweler weighed over 400 pounds, known as Tarzan, he kept his money and jewelry under his mattress. The criminals took the stash, locked the door and then jumped a high wall and fled in the darkness of the night.

Esther managed to escape the gags and started screaming. The neighbors immediately called the police and firefighters, who broke down the door to lend assistance to the jeweler, who was unconscious and bleeding profusely as a result of his wounds.

Upon arrival at the hospital he died. According to the autopsy of the Institute of Legal Medicine, the cause of death was caused by suffocation. The DTI (Department of Technical Research), opened a file, named the Tarzan Case.

Lieutenant Yoelkis Céspedes Ramos was appointed instructor — a position that combines some of the functions of an investigator and prosecutor. After the preliminaries by the experts and the crime lab, he began investigating possible suspects.

He didn’t have to dig too much. It was learned that ten months earlier, five citizens residing in the neighborhood of Mantilla with an address in Centro Habana, had planned a robbery at the home of jeweler.

Given this evidence,they arrested the six suspects. And searches were made of their dwellings. No jewelry or money was found. The evidence of the crime was a coil of rope and the alleged wrench that broke the window of the Gonzalez Otaño residence.

In addition there were some garments, which were subsequently subjected to the smell test, and tested positive according to the police report. In interviews, none of the defendants pleaded guilty to the events of the night of September 14, 2010.

They admitted that they had planned to rob this house months earlier, but confessed that that night they were not the assailants. Esther herself, Otaño’s wife could not recognize the robbers who were masked, but in a voice test, where the suspects read aloud words such as “kill him” and “where’s the money” Esther said she recognized the voice of one of the malefactors.

On 15 September, in her blog Cuban Legal Advisor, Laritza Diversent denounced that Esther Fernández Almeida — the only witness present at the events and the last person who saw the murdered jeweler alive — was given permission by the Interior Ministry authorities to leave the country for Spain.

In Cuba the police machinery starts from a simple premise. The suspects are guilty and have to prove their innocence. It’s the rule that criminal history and bad social contract are weighty elements in the investigation.

When the instructor presumed that he had the perpetrators, the scientific evidence is ignored and the emphasis is on extracting a confession from the detainees as quickly as possible.

In the Tarzan Case, the accused pleaded not guilty. With precarious technical work, no fingerprints from the crime scene, they based it all on the basis of an odor.
The suspects are in preventive custody in Combinado del Este prison, the largest prison in Cuba, located on the outskirts of Havana. They have let their families know that the evidence has been falsified.

The reason they allege is force majeure. That night they were not in the place of the crime. The witnesses who can testify on their behalf don’t have the confidence of the police because they are close relatives or spouses.

These guys are not saints. They have stolen and have been involved in countless problems with the law. But, they say, they are not murderers. The case has many shortcomings and loopholes.

One of the defendants, Peter Valerino Acosta, who did business with the jeweler, the vessel had been with members of his gang in Mantilla. The night that the gang gave up robbing the jeweler of St. Michael, they claimed it was because of the tight security of the home.

The jeweler had two dogs and a couple of guards who guarded the house every night. Suspiciously, the night of September 14, 2010 there were neither dogs nor did any of the guards make their rounds.

It was left in the hands of an impartial tribunal to demonstrate who was responsible for the events. On November 28, 2011 in a close and warm room on the fourth floor of the Provincial Court of Havana, a stone’s throw of the Capitol, the trial was held.

The citation said it would begin at 8 am, three hours after convening, the process started. Two dozen guards led to the six prisoners, who arrived in an old Russian paddy wagon painted olive green with little ventilation.

The prisoners were led tightly handcuffed to the cells located on the first floor of the Court. When the trial began they were transferred to the courtroom without handcuffs.

In just five hours the Prosecutor presented its case and without solid arguments, with no witnesses called or a forensic report, upheld the judgment of 18 to 27 years imprisonment for the accused.

The defense lawyers were in tears. At times, they were mistaken for the Prosecutor. No defense attorney demanded a DNA test of the detainees. According to Laritza Diversent, DNA tests are performed in Cuba only in extreme cases.

I guess almost 30 years behind bars that await a person who pleads not guilty is an extreme case. Even the experts who were present at the trial were the same ones who were at the crime scene.

Faced with such legal nonsense, and close to two in the afternoon, Ramon Hechavarria, one of the accused, in a firm voice stated that all the evidence was false and asked to be transferred to the cell.

Along the way he received a brutal beating by prison guards, in view of all. His wife also received a few slaps, meanwhile shouting “murderers” in the apparently sacred house of the Cuban justice.

When with a monotonous and quiet voice the head of the Court read the sentence, all hell broke loose. Several women were arrested and there was excessive use of police violence.

Five days later, several of the defendants were “planted” in prison. And two of those convicted sewed their mouths shut in protest over what they consider an unfair trial.

It is hoped that the Cuban legal machinery will rigorously analyze the case during the appeal. Bad legal proceedings in different killings have become the rule, like the girl of Bayamo, with a police investigation which leaves much to be desired.

In a country that lives at the limit of faith, where material shortages and the lack of a future provokes outbreaks of cholera, processes without full legal guarantees may trigger street protests in slums and among the relatives of the defendants. They feel they have little to lose.

Photo: paoloanselmino, Panoramio. The Provincial Court of Havana lies in the building that was once occupied by the Diario de La Marina, opened in 1958. It is located at Teniente Rey, facing the National Capitol.