The Cuban Telephone Company or Compañía Cubana de Teléfonos, as it was known by Cubans, was an American company, with well-paid employees and technicians that offered and guaranteed phone service across the country, as a monopoly. It built a beautiful building in Havana for its headquarters and other buildings and facilities in the same city and other provinces and municipalities. It is true that, in the early fifties, it still did not satisfy the large demand from citizens, and even acted with some slowness to extend new lines, but it is certain that the service was high quality and offered at rates affordable to the average citizen .

When the regime changed, it was nationalized, like most U.S. properties on the island (then it would be played by Cubans), to musical accompaniment to the rhythm of conga, with the participants carrying a coffin with a sign saying se ñamaba (it is called), a typical and repeated scene at the time of the overwhelming parade of patriotism in the first few months of 1959. 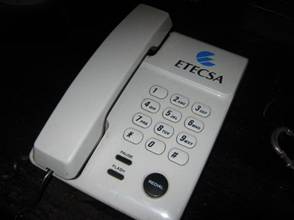 The Compañía Cubana de Teléfonos (nationalized), renamed March 13, was responsible for telephone service and, after the initial joy, it began to deteriorate, going from bad to worse, until it had to be shared, first with Italian capital and then with Mexican (or was it the other way around?),in order to operate it and modernize it.

The effects of the joint venture was noticed immediately and ETECSA (Empresa de Telecomunicaciones de Cuba SA) — as it was renamed again — began to be an example of good performance, superb and varied services and friendly customer service from its employees and for technicians.

Everyone talked about how well ETECSA worked, until the foreign capital was withdrawn and it returned completely to Cuban hands (“hands” means “the government). Involution was reactivated and now ETECSA, in regard to installation of new phones, moves and repairs, at least in national currency, leaves much to be desired.

Nor all is well in freely convertible currency. Of course, their offices are profusely decorated with huge color photos of the main living leaders (aren’t these prohibited to prevent a cult of personality?), and political slogans, getting any service requires wasting one’s time, and the attention from their employees and technicians is not the best.

Sometimes, committing the sin of naiveté, I wonder:What if after nationalizing it, seeing its inability to function, they handed if over to Italian and Mexican capitalists, capitalists just like the Americans? A failed experiment and a leap into the void? If we’re talking about offering it to foreign capitalists, who decides to take the risk.

I’m speaking only of this case. But we could bring up dozens of them, more tragic: the sugar mills, urban transport companies and freight railroad companies, the electric company, the packaging of meat products, products from the sea, soap, detergent and cosmetic factories, the manufacturing of biscuits, chocolates and confectionery, textile mills, shoe factories, the roasting of coffee, and so on.

Most of these facilities being now obsolete, bankrupt, damaged or disappeared, we are forced to have to import what was once produced here, eliminating jobs. In all, the same wrong procedures and the same result: FAILURE. Undoubtedly, they were decisions more related to testosterone than to neurons. It is a reality very difficult to hide!