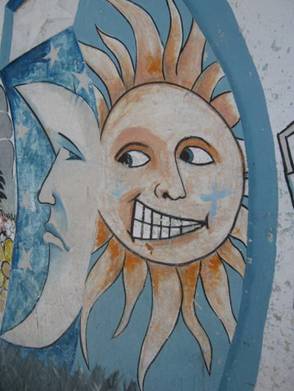 It was around ten in the morning and the heat was unbearable. The street was shimmering, reflecting the scorching sun. The pushcart vendor had taken refuge under one of the trees along Tulipan Street from where he was better able to offer his delicious guayaba pastries. He makes them himself, which allows him to sell them more cheaply: one peso per pastry.

This gentleman is more than seventy years old. Since his pension hardly covers his basic living expenses, he got a license to operate a pushcart.

He was surrounded by possible customers when all of a sudden a voluminous woman came forward and said to him, “I am a state supervisor (inspector). I have been here twenty minutes, observing you, and according to my watch I see that you have not moved from this spot in all that time. Therefore, I am giving you a fine of two-hundred fifty pesos. And don’t complain about it because that’s the minimum.”

All those present protested this gross injustice, but the fine was not rescinded.

Certainly the license that protects this type of activity implies that a vendor keep moving, something that, taken to extremes, as in this case, would make selling itself difficult. It is less certain, however, that the inspector displayed either sensibility or sensitivity since she could have been more flexible, calling attention to the issue within the first five minutes so that he could have avoided this pitfall. Instead, she crouched down like a ravenous bird of prey, waiting to swoop down on her catch.

This is only one of many such cases of abuse of power that take place daily in this city and in this country. I was able to witness it because it took place only a few blocks from my house. It is shameful to see how people with only the most minimal education flaunt the little bit of power they have. Without scruples of any kind they take pleasure in coming down on their fellow citizens, who are possibly as, if not more, obstinate than they themselves are.