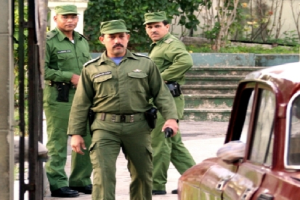 HAVANA, Cuba – Around 9:00 last night two officials from State Security’s Department 21 presented themselves at my house to warn me that the Second Democratic Forum on International Relations and Human Rights (independent) would not be allowed to be held in Havana this coming 28 January.

The opposition forum is scheduled parallel to the Second Summit of the Community of Latin American and Caribbean States (CELAC), to be held in the Cuban capital on the 28th and 29th, with the presence of heads of state and governments, as well as high level officials from the 33 member countries.

The meeting that the political police are trying to block has among its objectives to put into perspective the incompatibility of the one-party political system in Cuba with CELAC’S Special Statement for the Defense of Democracy.

One of the agreements made at the founding meeting of that organization, held in Caracas on December 3, 2011, says, and I quote:

“We agreed on a clause committing to promote, defend and protect the Rule of Law, democratic order, sovereignty of the people, Human Rights and fundamental freedoms, including among others the right to life, liberty and the security of the person, not subjecting them to torture or to cruel, inhumane or degrading treatment, arbitrary arrest, detention or exile, or to make them objects of summary and arbitrary executions or forced disappearances, and [to respect] freedom of opinion and expression.”

A brief review of what is stated here is enough to question the regime serving as a host for the summit.

The systematic arbitrary arrests, acts of repudiation and trials without the minimum procedural safeguards, against pro-democracy activists, express a behavior that contravenes international standards that guarantee the exercise of all the rights of citizens, regardless of the politics and ideologies of governments.

In addressing other points of gross human rights violations, we should highlight the appalling prison conditions and the chances of being detained without having broken the law. The offense of “pre-criminal social dangerousness” contemplates imprisonment without evidence. Dozens of opponents have gone to prison under this legal (?) provision.

Moreover, it is ironic that the Cuban government carries out many humanitarian actions in several Third World countries, sending health professionals to areas of extreme poverty, while engaged in inciting mobs to beat the Ladies in White in the street, forcing its citizens to work for about a dollar a day in state enterprises, and maintaining full prisons, where, incidentally, more than 80 political prisoners languish.

The worst of this nightmare is the impunity. There are no legal means for the protection of citizens. The life of an ordinary Cuban passes among the misery and repression. Alternatives to escape the suffocation are in reality to leave the country by any means or to risk one’s luck on the black market. To survive through honest work has become a utopia.

In over 50 years of Real Socialism, inefficiency, lawlessness, lack of control, apathy and state terrorism have been regularized

Pavel and Pedro, the two agents who visited me, were emphatic in their warnings.

What else can one expect from the executioners who sometimes present themselves as teachers of tolerance and decency?

I know the names they gave me are false but that’s not important. What is beyond question is their determination to prevent, by all means at their disposal, our meeting of 28 January.