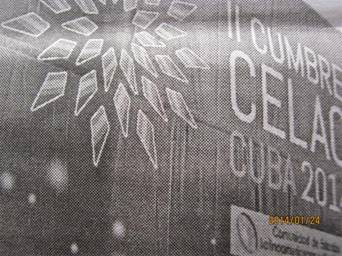 It’s almost obligatory to write about the Second Summit of the Community of Latin American and Caribbean States (CELAC), to be held in Havana on the 28th and 29th of the present month. To demonstrate efficiency, the organizers have already prepared the installations for the Summit, repaired and decorated the roads by which the participants, guests will travel and taken all the corresponding security measures. As always, those affected have been the citizens, who for some days have collided against the prohibited access, rerouted transit and many other regulations applied by the authorities.

CELAC, as we know, does not have among its interests the economic integration of the region; rather it is an instrument of coordination and agreement for Latin American and Caribbean cooperation. Thanks to this, the United States and Canada –possessors of great natural resources and developed economies — have been excluded from membership. That is, from its beginning, its principal promoter, the late Venezuelan president, applied the politics of his master, the ex-president of Cuba. It seems Canada was excluded so that the United States could be.

Although CELAC doesn’t interfere with the politics of each member country, it’s absurd to proclaim respect for the uniqueness of each individual,for diversity and  differences, when the member countries don’t do so and harass people within their own territory. At least, respect for individuals should constitute a moral imperative.

Thirty-three countries are members and it’s notable that the majority — although the most radical criticize the politics of the United States — have continued to belong to the Organization of American States (OAS), headquartered in Washington, with the exception of Cuba, expelled in the early years of the sixties, for not sharing the organizations democratic principles, and its inclusion has been proposed for some time, declined by the Cuban president, perhaps not wanting to support a new expulsion, its political interests not coinciding with those of the organization.

Despite these absurdities, the idea of regional cooperation at all levels is positive, whenever the Latin American and Caribbean presidents are capable of putting the ideological and political interests of the region ahead of their own, and engaging and respectful and responsible relations among themselves and with their close neighbors and the rest of the world. On an ever more globalized planet, its impossible to develop in isolation.