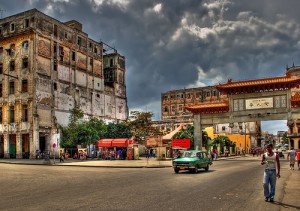 After 6 in the evening, Carlos, 48, looks distractedly at his fold Seiko, and takes a swig from a large Corona beer. He’s dressed in light blue vented Bermudas, Nike shoes that cost $120, and a shirt with the face of Messi, the Argentine star of the Barcelona football team. Right now, from his iPhone, he’s bargain shopping for a Willy jeep made in the USA in the ’50s.

Daily, Carlos meets at a downtown cafe near the Paseo del Prado, with the five contract drivers who work for him. He waits there for each driver of the 3 jeeps to give him 1,000 pesos (40 dollars) and 550 per capita for the two drivers who drive “almendrones,” — the old American cars — faded, but strong as tanks, and while he waits he drinks half a dozen beers with Gouda cheese cubes.

In one day, Charles took home 4,200 pesos (170 dollars). The five drivers who work for him usually earn between 400 and 1,000 pesos a day, a wage unimaginable for a state employee. Although it is true that their work shifts sometimes exceed twelve hours.

Carlos doesn’t spend all the money he earns he earns on beers or nights with expensive whores. “I have to invest in tires, fuel and spare parts. Also pay the mechanic that maintains my cars,” he says.

Like Carlos, there is a growing legion of successful small entrepreneurs. The most profitable sectors are transportation, paladares (private restaurants), and trading in agricultural products.

In Havana there are not only newly minted entrepreneurs who own a fleet of 5 or 6 cars. In the services there are other types, people who run several rental houses, a couple of cafes, or own a dozen trucks in any corner of the city where prices are going through the roof, offering fruits, vegetables, beans and even apples.

After October 2010, when General Raul Castro kick started new forms of self-employment, and the army of his state inspectors got a little more flexible, a number of Cubans who kept their money under the mattress were ready to invest that money in businesses that offer good short-term benefits.

Not without a certain trepidation. Anyone who has lived in Cuba knows how the regime goes. At times, when the economic situation is extreme, they let out the line for private initiatives. But if they see that the boat is no longer taking on water, they make up a lot of regulations and send people behind bars for their little initiatives.

Now, Castro II has promised to respect certain rules as long as people can demonstrate that their money is from legal sources and they pay their taxes on time.

People like Rene, 60, who all their lives they have scrounged to find money on the black market, initially had misgivings. He is one of the old foxes can be found in the underground world of business.

“When the artisans began in the Cathedral Square, there I was. In the 80s, I also sought money in agricultural markets. I’ve been in jail twice on charges of illicit enrichment. So I do not trust them. It’s like a chess game. I have to have an exit strategy in case of danger,” said Rene, owner of two retail clothing stands and eight fruit and vegetable trucks.

Rene takes in just over 150 dollars a day. After a cup of strong coffee at home, starting at 4 am, on one side of the Joseph A. Echevarria City University (CUJAE), in the Rancho Boyeros municipality, he awaits the arrival of trucks packed with agricultural products, to buy in bulk and cheaply.

Others like Yosniel, 36, one day asked his relatives on the other side of the pond for a loan, and he got $4,000. And with the money he set up a home repair business. It has a crew of masons and plumbers. “The thing was doing well for me. I even get construction materials at bargain prices then resell to people who need to repair their homes,” he says.

Among these new native entrepreneurs, a particular interpretation of the regulations of self-employment predominates. They think the State does not allow control of those businesses — whether one or several — that encourage a lot of money in the hands of one person or family.

But Havanans like David, owner of two auto repair shops, manages in his own way. He is used to finding money under the pressure from a government that sees a threat in the entrepreneurial types.” We’ve been playing cat and mouse for 53 years, we try not to be the hunted,” says David with a broad smile.

Rightly, the regime feels that if their retailers do not offer raw materials, they can assume that they go out through the back doors of the state workshops.

But we all know in Havana, including the government, that behind this growing mass of vehicles that came out of the workshops of Detroit six decades ago, there are a handful of ingenious mechanics and body guys who keep the fleet of 6,000 ’almendrones’ rolling in the capital.

And the question of how far a State with a grudge will go in allowing those given to individualism and the good life to make money, is something that is always latent in these post-Fidel businessmen.

“That depends on the General. If our businesses don’t affect the wallets of the military corporation, I think they’ll leave us alone. But otherwise, they’ll give a turn of the screw to certain regulations to suffocate us,” says Carlos, the flamboyant entrepreneur, who owns five cars. It wouldn’t be the first time.

Photo: ZX-GR, Flickr. Entrance to Chinatown of Havana, where you can see the rise of private entrepreneurs.