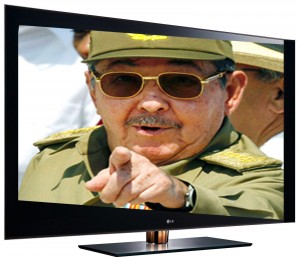 The Cuban government on Saturday ordered the immediate closure of small private cinemas, which for months have been operating in private homes, because “they were never authorized,” in a note published in the local press.

The directive is signed by the Council of Ministers chaired by Raul Castro, and refers to the situation of self-employment (private), promoted by his Government among the reforms to “update” the economic model of the island.

“The film exhibition (including 3D rooms) and computer games, will immediately cease any self-employment activity,” said the note, which appeared simultaneously in Granma and Juventud Rebelde, the two national newspapers.

These activities “have never been authorized and are being developed as a single service and sometimes associated with other offerings, such as those related to food services,” it added.

Dozens of rooms opened in Havana and other cities in recent months, improvised in houses or locations, with the peculiarity that many films were projected in three dimensions (3D, a technology absent from the state rooms)

The newspaper Juventud Rebelde even dedicated an extensive article on Sunday to these rooms without criticism and noting that some state rooms are planning to use 3D technology.

The audience, usually children, pay between one and four dollars per function, a price which in many cases includes a snack.

The technology used in these small rooms is not for sale on the island, and is usually sent by relatives and friends from abroad, with a value estimated at $3,000.

The text makes reference to another previous provision, which prohibited the activity of selling clothes imported through non-commercial means and articles bought on the commercial network, using licenses meant for other kinds of work.

It noted that in these last two cases, are granted “as an exception” a deadline of January 31 to liquidate their inventories.

“These measures are necessary corrections to continue bringing order to this kind of management, to combat impunity, enforce the law and protect self-employed workers, the vast majority of whom meet established regulations,” said the note.