HAVANA, Cuba, October, www.cubanet.org – While most young people have virtually no place to go, others go to clubs where the entry fee alone is more than the weekly wage of the average Cuban. The price, actually, is nothing special, but we know that in Cuba 5 CUC is a sum of money that few pockets would be willing to pay to get into a halfway decent establishment.

Havana is a city that has not died, but languishes. On weekends, most of its inhabitants dedicate themselves to wandering around to overcome some collective boredom. People are gather in a few places in the city, like Paseo de G or Coppelia, or they wander around with nothing to do along the well-known streets of the city like 23rd or the Malecon.

The most common diversion is sharing from a bottle, can or carton the alcohol that can be acquired on any park or on any corner for a little party. This, far from representing some collective happiness that many tourists relate delightedly when they return to their own countries, is a distinctive feature of the decadence that more and more marks recent generations of Cubans.

You have to have enough money to entertain yourself and have a really good time in the capital. Some girls — and also boys — prostitute themselves just to have the privilege of entering what are considered the “luxury” venues within a short circuit of nocturnal Havana: cabarets for foreigners and discotheques in hotels which, in any great city in the would pass for second-rate, except that here sex-for-hire is infinitely cheaper. The number of Cubans who go to these places is tiny.

Meanwhile, in the streets, amid apparently immobility and the lack of alternatives, the most destructive forms of entertainment flourish, forms that have been criticized lately in the government’s own media, with its continuous calls to public order and the “fight” against “the improper behavior of a people like ours.” 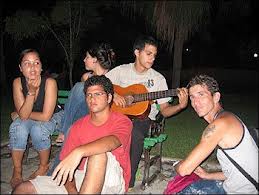 Some teenagers engage in all kinds of dangerous games, damaging the urban environment and even assaulting other passersby. They hang onto the buses from their bikes, or, on rainy days, do it barefoot sliding along the pavement; they break the garbage bins and write vulgar signs, abuse vehicles, shout, insult, push and cause all kinds of annoyances. The deadly boredom of Havana reaches a crescendo each year with the annual carnivals, which have a far from comforting quota of deaths and injuries in riotous quarrels or knife fights.

The government, instead of promoting healthy options, exerts itself in punishing the undisciplined. It doesn’t seek to create appropriate environments, stimulate the market of services targeted to Cubans, repair the occasional damage in a timely fashion, or provide abetter education in the schools. 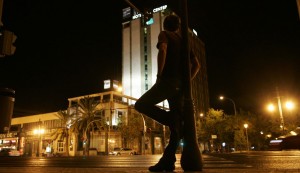 Of course, no child of the famous residents in the most exclusive neighborhoods inhabited by the super-exclusive caste of the country’s leaders looks in on these commoners’ parties: nor will they favor them with their presence, because, for their families, the already most “generous” result is having converted one of the most prosperous and active cities in the Caribbean into a dark and silenced sun helmet.