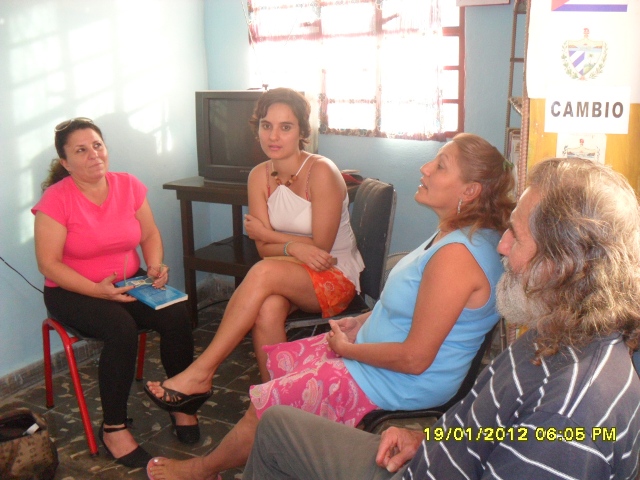 Well now I am in my house, just returned from the sixth birthday of Ada’s twins; Ada is the sister of my friend Agustín. I love going with my daughter, all very simple, just great in the way that she knows how to share this family whose roots are in Villa Clara.  There is nothing warmer than a home of Cuban peasants. And Agustín; he administers the Dakaisone blog.

The girls have played, the adults have chatted.  When a person lives in a country with laws that limit what one can eat, what books you can read, what you are permitted to do and what you risk when your conscience wants to take you beyond that, you go over and over the same things, but it is left to the rest to talk about their experience and why it is a good thing to find other similar people who repeat to each other with their own voice what you already know.  Nobody has a solution, only to speak about resistance.   The resistance of conscience that knows to plant itself on free ground and which can face the winds that the constipated entrails of the Revolution spew, not without holding our noses. A beautiful and tragic image of the awoken conscience in the middle of a sewer.

At the party, I met Omaida and her daughter Jennifer. Omaida is the source for a network of independent libraries. The term “independent library” could sound strange but in communist countries, in dictatorships of the extreme left, such libraries are the only oases of good literature. In the case of Cuba, the history of literature is not even totally complete  for the twentieth century. All that was saved was what the magazine Orígenes collected. The second half of the twentieth century is empty in the piles of shelving or repeated in others, such that it seems like no-one writes poetry that is worth the trouble in the contemporary world, or novels, or essays that are not indigestible in the realm of the Americas.

As for myself, I’m getting sick and tired of Saramago and the Castro’s personal Columbian friend (Gabriel Garcia Márquez ) because I’m convinced that enough better literature has been written in the world than to have to forgive the creator of the town of Macondo of his mortal sin. I have books that are dearer to me but they continue to be back issues to which I can return as is only possible when so few books are known.

In Cuba, only the friends of the Revolution get published. Because the Revolution; apocalyptic beast with the number of man that “very few have understood” is a beast with few friends. It can’t survive when it is compared to the free expression of the mirror that has found its nature in the vacuum between the freedom of the glass and the quicksilver, the absoluteness of the death of ideologies, the easing of the mind before the serenity of a lake that perfectly reflects a mountain, the silence of haiku.

It is rare to find a book from Octavio Paz, Vaclav Havel, M. Kundera, Vargas Llosa, absolutely impossible to find a book from Carlos Alberto Montaner.  It is easier to be badgered by Italo Calvino who was a communist or Eduardo Galeano who has remained as the only one that state misanthropy can resort to.  Calvino wrote very very well, but Galeano did it terribly terribly badly, and used the case of Cuba as a symbol, I’m not sure of what, but he behaves for the world like no Cuban resident of the island does.

In this Cuban experiment, that is about how submissive human nature can become when it submits to the absolute control of government political and economic totalitarianism, it has been seen that the first recourse has been the education of “the people” that are thought of like livestock.  The example of that unglamorous little library where the ex president of the island made the curatorship of the University’s books for everyone without universality.  The information that the conscience would be subjected to was selected carefully, it was repeated, it was threatened and the result is this will to survive in an autophagic way, to not protest save a few exceptions. On of the ways to produce consciousness to open up the bandwidth of information, providing news, evangelizing with the literature of liberty, and for this reason it is a crime to administer a separate library.

That’s how I learned, with horror, about the harassment to which Omaida has been subjected by state security. They sent an agent she describes as having crawled out of a dumpster who has the nerve to sit uninvited in her living room and threaten her.  And although it seems like something out of a bad Bukowski novel, he dares to call on her birthday to remind her that an evil shadow lurks where only her guardian angel should dwell.

But these guys have no fear of God. She also told me that the chief agent made a visit too, a man who can cite books and authors. Undoubtedly he is autistic, because agents do not understand what they read. Their core value is the constipated revolution. These thugs do not know the potential Delphic curse Lezama invented having to do with the famous inscription “gnothi seauton” (displaying my complete ignorance of Greek), which means “Know thyself.” That is what literature is for: to illuminate, to transport, to change the adornments of the soul until its final form is found, released by the image.

My Christian charity is not sufficient to pity them.