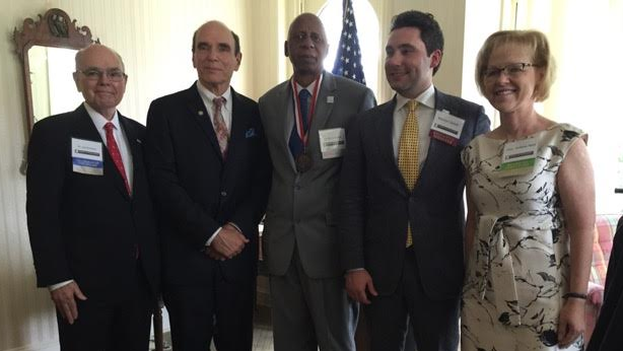 14ymedio, Washington, DC, 12 June 2015 — In a ceremony that took place yesterday in Washington, DC, the Victims of Communism Memorial Foundation awarded the 2015 Truman-Reagan Medal of Freedom to Cuban opposition figure Guillermo Fariñas. The dissident used the opportunity to dedicate the award to “all the (Cuban) political prisoners of the ’60’s and ’70’s, when nobody listened,” as he stated to 14ymedio.

In a meeting with the directors of the Foundation, Fariñas thanked them once again for “not forgetting the thousands of Cubans who have been executed, arrested, tortured, or who have died in the sea trying to escape from Communism.”

Alexander Podrabinek, a Russian human rights activist and journalist, was also awarded the 2015 Truman-Reagan Medal on Friday afternoon. The dissident has been the victim of several incarcerations, and has undertaken his work under the unrelenting surveillance of both the Soviet régime and Vladimir Putin’s authoritarianism.

The first event of the day was a luncheon dedicated to the “triumph of freedom,” where Senator Ted Cruz of Texas was the featured speaker. The final speaker for the night was Congresswoman Marcy Kaptur, Democrat of Ohio.

The Truman-Reagan Medal of Freedom was created in 1999 to honor persons and organizations that have demonstrated a lifelong commitment to freedom and democracy, and against all forms of tyranny.