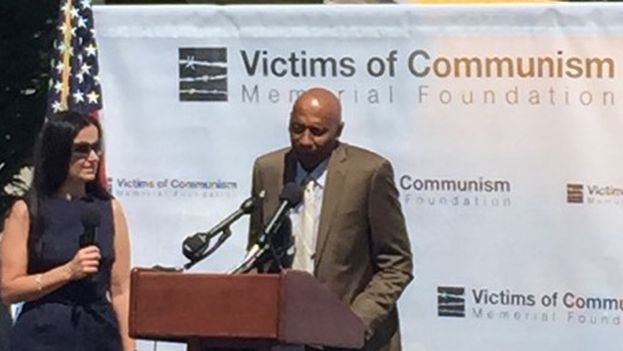 14ymedio, Jose Badue, Washignton DC, 13 June 2015 — Despite a temperature of 97º F (36º C), and unbearable humidity, about one hundred representatives of nations and peoples – including a Russian LGBT association – who have suffered the nefarious consequences of Communism, met at the corner of New Jersey and Massachusetts Avenues at 10:00 AM before the Victims of Communism Memorial.

It was very sad, but at the same time very interesting to see so many diverse people united by the same tragedy. While I was speaking with a group of Cuban former political prisoners, reporters from TV Martí and Diario de Cuba approached us. Since I had already explained to the ex-political prisoners that I was there to do my part for 14 y medio, one of them remarked how beautiful it would be in a future Cuba where free journalists would be able to compete in their coverage of whatever they chose to cover. Those old men still are a source of inspiration. They never stop dreaming.

Fariñas gave a very moving speech. He thanked the Cuban former political prisoners there in attendance for their struggle and sacrifice. Fariñas did not give a prepared speech, as is usually his style, and as his English interpreter told me. When Fariñas concluded, all those present gave him a resounding standing ovation.