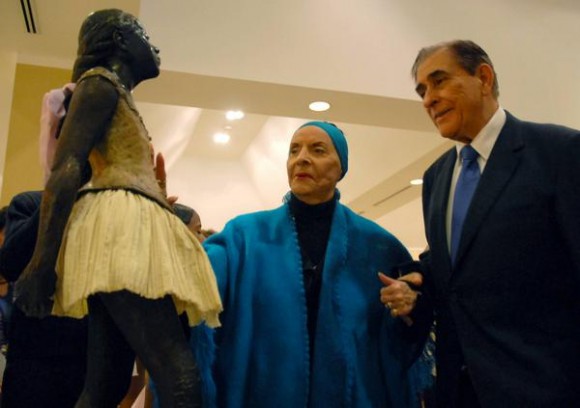 The new policies of flexibility in the U.S. embargo against Cuba have permitted an exhibit, provided by the MT Abraham Center for Visual Arts in the United States to be displayed at the National Museum of Fine Arts.

Nestled in Zulueta Street, a stone’s throw from the Spanish embassy in Havana Vieja, the Museum shows a complete collection of sculptures by Edgar Dégas (Paris 1834-1917), one of the key figures of world art.

The exhibition is part of the tributes that in 2010 were conducted in different institutions and countries to mark the 90th birthday of the prima ballerina assoluta Alicia Alonso (Havana 1920).

Under the title “All the sculptures of Edgar Dégas,” the exhibit consists of 74 pieces, shown previously in Athens, Tel Aviv and Sofia. It will remain in the Cuban capital until the end of January and then continue its tour in Spain.

The star of the collection is The Little Ballerina of 14 Years, sculpted between 1878 and 1881, the only sculpture that this controversial and contradictory Frenchman showed while he was alive. Praised and reviled, Dégas is known as one of the founders of Impressionism. He was considered by Renoir as the best modern sculptor, ahead even of Rodin.

Despite the heavy and persistent rain over the weekend in Havana, the show has had an extraordinary reception. Cubans who advocate ending the embargo and normalizing relations with the United States are grateful for the possibility of cultural exchanges between the two countries and also the measures taken for the benefit of the families on both sides.

Now, from the United States, you can send through Western Union up to $10,000 and receive it on the island in convertible pesos with a 10% tax. Soon, direct flights to Havana will depart from several U.S. airports, not only from Miami, New York and California.

Raul Castro’s government is rubbing its hands. The Dégas exhibit can be a beginning. The icing on the cake would be to end the old, obsolete embargo and have droves of Yankee tourists arriving. It would not be bad for an economy that is leaking. Despite the drought.

Photo: Cubarte. Alicia Alonso contemplates The Little Ballerina of 14 Years, by Edgar Dégas at the Museum of Fine Arts in Havana.