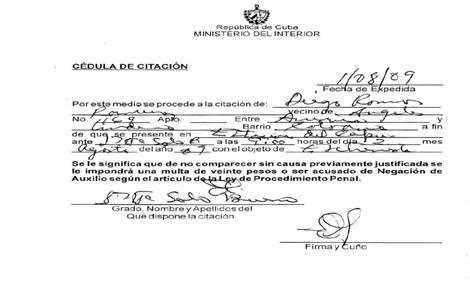 There are many who say that Ministry of Interior agents do not need judicial authorization to officially summon a citizen. However, the Criminal Procedure Act, approved by the Cuban Parliament in 1977, requires that such diligence is done “through a summons issued by the Secretary,” a court official.

The official citation is intended to clarify or prove a crime under investigation. However, State Security agents use the “interview” or “define the situation” of independent journalists, human rights activists, bloggers and political opponents. In the majority of cases they do not comply with the legal requirements.

Procedural law regulates, albeit loosely, a procedure for this. In principle, the authority must substantiate, by judicial decision, with the clerk of court, the reasons for its decision. Then the judicial officer signs and issues the respective subpoena .

The process should ensure that citizens are not unnecessarily disturbed. In fact, in practice, no legal authority meets this requirement. Even though the law itself makes it clear that “citations issued without observing the requirements are void.”

The provision itself, however, clarifies that if the said person summoned appears, than the summons becomes fully legal, just as if it had been issued in accordance with the law. Citizens are unaware of this detail and, in the majority of cases, respond to an illegal summons assuming it to be legal.

The fact undermines the concept of the Rule of Law, which requires state institutions to be consistent with, at the time of exercising power, legal forms predetermined by the political representatives of society (National Assembly) and controlled by the courts.

In this case, the Criminal Procedure Act provides immunity to government bodies for their own actions. It also favors arbitrariness, among those who have the obligation to act in compliance with the law.