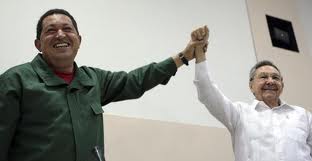 The Cuban government takes advantage of the situation of the President of the Bolivarian Republic of Venezuela to assume the presidency of the Community of Latin American and Caribbean States (CELAC).

As everyone knows, the health outlook of the president of Venezuela, Hugo Chavez, is not entirely favorable. He is beset by complications such as heart failure or respiratory infection, not yet controlled. There are speculations that Chavez will not win this battle, because overcoming cancer is very difficult.

A man with ambitions like Venezuela’s vice president Nicolás Maduro feels more secure in his political position every day, as President Chavez in his statement to the foreign press insisted that the regime should continue with Maduro.

Moreover, the opportunity presents itself on the doorstep of President Raul Castro. With the absence of his beloved “political brother” he has gained ground lost because of the destruction of the Soviet Union.

Surrounded by current political frustrations, Castro will not let the capital opportunities that are opening pass him by.

He will be very careful with this, because today there is no apparent danger to the world balance. If things continue to develop favorably for Cuban dictators. There will be a new era of world domination.