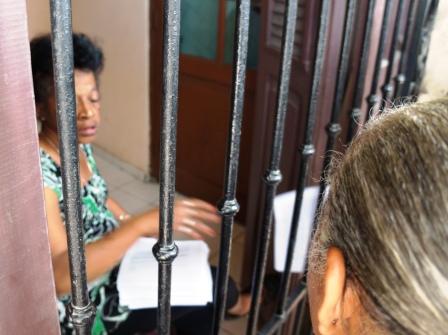 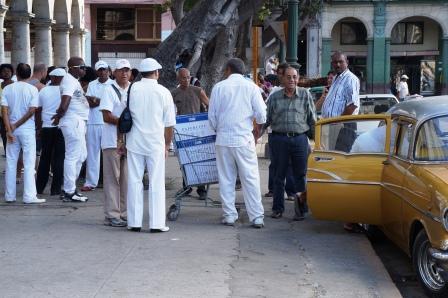 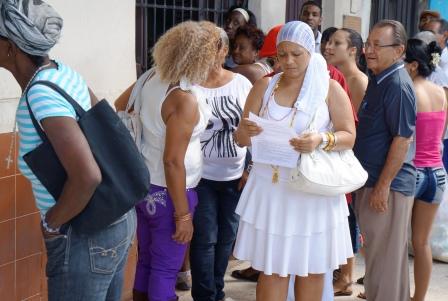 Havana, Cuba. The last Tuesday of January the “Yoruba Cultural Association of Cuba” dawned, as it does every year, to a crowd of people at its doors awaiting the famous Letter of the Year. Religious predictions governing the fate of the Cuban nation.

Throughout the morning the number of people increased until about two in the afternoon when the boxes carryring the predictions finally arrived.

The Cuban Council of  Elder Priests of Ifa affiliated with the Yoruba Cultural Association issued the following predictions for 2013*.

Prophecy: Ire ariku yale tesi timbelaye lese orichas (a written message of health, attached to the earth, that is provided by all Orishas [saints])

2 – On the earth there is no divine justice

Give the roof something to eat

Ifa says: In his predictions, saint Egun will play an important role and will even accompany the saints Orichaoko and Oshun for the overcoming of difficulties this year. Therefore it’s necessary to pay special attention to all aspects Egun.

Ifa says: We should pay attention to Elegua.

Ifa says: We should cultivate an even temperament so as to prevent stress and to protect our own health.

Ifa says: We should avoid problems between couples.

Ifa says: Ifa priests should be humble, respectful and examples to the godchildren and society.

Ifa says: We must be careful and very respectful of women.

Ifa says: We must plant in order to sow – in social life, in the family and at work.

Ifa says: There will be difficulties and food shortages, especially agricultural produce. We must take steps to prevent this.

Ifa says: All rituals that we have outstanding must to taken care of.

Ifa says: We must act clearly and precisely to avoid embarrassment, disrespect and misunderstandings.

Ifa says: In this Odu, jealousies and betrayals will predominate, so it is recommended to be alert.

Ifa says: With regard to health we must keep good hygiene, be careful about taking expired medications or those that have not been prescribed by a doctor.

Ifa says: In this Odun problems with the liver, the rectum, childbirth complications, skin and blood pressure diseases will be common. For which it is recommended to seek medical attention.

Ifa says: We should avoid grudges between families, both social and religious ones.

Ifa says: We must carefully examine all documents that come into our possession and be very careful about signing them if we’re not sure what we’re doing.

Ifa says: We should be aware of events: climatic, economic, social, family-related and any other type that might substantially change the way we live.

Ifa says: Climate changes that have been taking place for several years will continue to occur and in some cases intensify.

Ifa says: In this Odu, Orunmila was imprisoned for disobedience, so we must be very careful with attitudes that lead to legal problems, such as drug use, alcohol abuse, fraud, the use of weapons, etc.

Ifa says: Our overall improvement depends on the manner in which we are able to comply with the guidelines of the orishas.

The first of December, 2012, with the presence of a significant number of babalawos from Cuba and other countries, in addition to members of the Cuban Council of Elder Priests of Ifa, ceremonies were held related to the pre-opening of the “2013 Letter of the Year” at the Yoruba Cultural Association of Cuba.

The recommendations were as follows:

The 25 key positions that were requested were carried out. In all cases the responses from the deities were quite satisfactory.

On December 30, 2012, sacrifices were made to the deities as determined in the pre-opening ceremony.

Those ceremonies were held at the “Yoruba Cultural Association of Cuba.”

Note: The translation of the letter is taken from Havana Times.