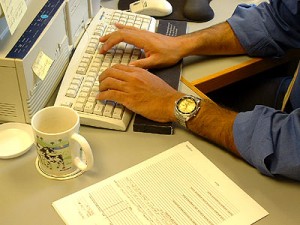 Although they say abroad that the government of General Raúl Castro is urgently calling for a different period – one that is critical, controversial, appealing and lively – in practice the official reporters are not rushing to drop the burden of language loaded with slogans and pieces from speeches by Fidel Castro.

Journalists working in the state media are thinking twice before producing a hot story containing the reality of the street, which they see in their neighborhoods filled with prostitutes and guys cautiously selling powdered milk, vegetable oil or jeans stolen from some store.

We shouldn’t expect that this bold crowd of “revolutionary journalists,” who look more like scribes or ordinary letter-writers, will decide to write about political aspirations or publicly request the stopping of the acts of repudiation against the Ladies in White and the beatings of those who think differently. It would be asking too much.

The polemical reflections are from a handful of bureaucrats, who, from an office in the Palace of the Revolution, dictate what should be news. For now, it’s possible to transmit these things only on the Web, after passing them through a sieve that shows the editor the authors identify with socialism and are loyal to the Castro brothers. Without that confession of faith, writing for yourself is equivalent to having them open a file on you in the Department of State Security.

There is an open space of criticism and discussion for journalists and intellectuals accepted by the regime, but only on the Internet. They consider it unhealthy or undesirable for Cubans, those who drink breakfast coffee mixed with peas and eat bread without mayonnaise, to be able to read opinions that differ from the official discourse, which is tiresome and repeatedly published by the national newspapers.

The government’s interest is that these talented and fresh writers be read only abroad. So that those who romanticize the Revolution from a distance, and the Latin American and European Left, believe that something on the island is changing.

These inconvenient journalists, who Cubans on the island would like to read in the newspaper, are assigned to publish on personal blogs or websites. Then the guy deep in the Cuban countryside can’t read Elaine Diaz, Sandra Alvarez, Boris Leonardo Caro or gay Paquito, unless he has access to the Intranet.

For people in the real Cuba, lunching on pizzas in self-run cafeterias, after spending two hours at the P-7 bus stop to get home to the Alberro neighborhood, they have no choice but to spend a peso for an 8-page tabloid trying to be a newspaper and usually more useful for wrapping garbage or as a substitute for expensive toilet paper.

Controversy is served up….but exclusively for an elite.

It’s not just Raul Castro’s government that has inconvenient journalists. A sector of the internal opposition also has them. If you’re a foreign correspondent or freelancer and you don’t cover or write a few pages praising some of the events, conferences or projects that the local dissidents invent by the bushel, then they put you on a blacklist.

The least they accuse you of is being a Castro supporter. And in their frequent gatherings in the rooms of their houses, where vulgar dissidents gossip without factual information, you are labeled as an agent of G-2 (State Security).

Doing unfettered journalism in Cuba is like walking a tightrope. It will always awaken the capacity for intrigue and mistrust on both sides. But I prefer it that way. Or I wouldn’t be a journalist.