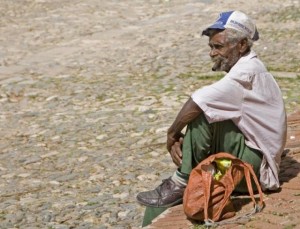 Being old in Cuba is a problem. Check this, if a young family have to work miracles to bring three meals a day to the table, buy clothing for their children and try to make money from who knows where to repair their shack, you can imagine how hard can be for an elder. It becomes harder if you are black.

The quality of life of the Cuban grandparents has been decreasing for a long time. They are the biggest victims for this war without thundering cannons that lasts for already 22 years, ludicrously called “The Special Period”. The new fiscal adjustments to balance out the finances has been striking hard at those of the third age. And it will keep pounding them. The General Raul Castro pretends to give another turn to the screw. He promises to end the old subsidies and throw in the trash the ancient ration card.

The most affected by these new measures are the elderly. In 2006 the government established a raise for the pensions. As an average, a retiree gets between 186 and 300 pesos (from 8 to 13 dollars a month). In everyday life, these amounts are very little. The inflation of some food products and the electricity bills, among others, it’s a bite that takes a big chunk out of the tiny increase in the pensions.

Ask Julia, an 82-year-old black woman, feeble and emaciated, if her retirement dough is enough to live her life with dignity. Her answer will be a pathetic grimace.

From the time she gets up, early in the morning, her life is hard. “I buy 100 newspapers in a news stand. Later I resell them for one peso each. Not always all of them are sold, so I have to sell loose cigarets and peanuts wrapped in paper cones. If I get lucky, I can have lunch and dinner. But most of the time I get money only for the dinner. I have no descendants and my family is in the same situation or worst. Being black and old is a curse”, she points out at dusk in a central avenue of Havana.

It is not officially known how many elders actually live as indigents. Cuba is a nation where the numbers and statistics are only known by the big shots. But what you are seeing in the streets is frightening.

The majority of the people looking in the trash containers, who pick pieces of discarded aluminum or sell any other junk at a city corner, are older than 60 years.

It is no longer unusual to see a drunk elder with home-made moonshine sleeping on cardboard. Or an abandoned old lady panhandling on the streets. And there’s not a government solution in sight for this sector of the population.

According to the data offered by the official news, the population of Cuba is getting inexorably older.

The pension system that guarantees a tranquil and safe retirement is bankrupt. The majority of elders who are wandering all over the city in search for food and money are humble working class people who once worked in the “construction of socialism”. Some are like Juan, 79 years old, who, in the Escambray mountains, chased the groups fighting against Castro. He also fought in Angola as a reservist.

For some years now he sleeps on the streets, in any place, wherever he is when the night falls. A porch, a funeral home or the staircase of any building.” A long time ago my family got rid of me. The same happened with the State. What they offered me was a position as school night-time security. I work alternate nights. I lost the sight of one eye. I escaped the seniors home, it’s better be dead than to live in such an asylum. Bad treatment and worst food. The only thing I wish is that God takes me with him as soon as possible,” expressed Juan while in a run down restaurant managed by the State he eats an order of white rice, black beans and boiled fish full of bones.

The senior citizen homes in Cuba in most cases are impoverished. They are run down buildings with a depressing look, and the people who pass by look the other way. On San Miguel St. almost at the corner of Acosta St., in the Diez de Octubre municipality, there’s one of them.

In the winter it is sad to look at a group of elderly wearing coats from the fifties to get warm. Swinging frantically on a rocker asking the passers-by for cigarettes and money. In the summer they sweat and stink. They pass the time playing dominoes on the asylum’s porch and watching TV. They eat little and bad. They talk nostalgically about the past, when they were young and strong. Many of them wish to die soon.

Most of these elders are black. The African descendants are living in an extreme poverty. The ones who live the worst. Dwellers of the prisons cells.

And when they arrive to the third age, the little hell where they grew up, their scarce preparation and family violent environment takes a toll. Along comes the insanity and the dole. They take refuge in alcohol. Or prefer to commit suicide. Decisively, Cuba is not a country for the elderly. Especially if they are black.