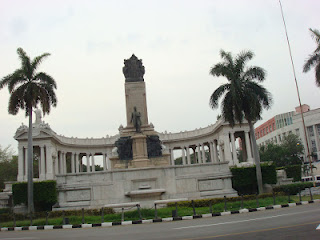 These are the forces that keep us alive: dignity, freedom, and courage.
– José Martí

I confess that if something causes me pain is to feel helpless, as a black citizen, every time I see the statue of José Miguel Gómez, located in area of El Vedado, in Havana.

The statue is right on the Avenue of the Presidents, a street with a constant flow of citizens and brothers in the struggle.

In a way, I share the opinion of those who see this statue as an insult to black Cubans and mulattoes because José Miguel Gómez, as President, was the main perpetrator of the racist massacre that took place in 1912.

However, pushing for the demolition of this statue goes against its historical truth, and this would create a negative precedent for the nation and for those who aspire to live in a free Cuba someday, with freedom and democracy.

You cannot swim against the current. José Miguel Gómez, like it or not, was the second president of Cuba. He served from 1909 to 1913, immediately after the U.S. intervention, protected by the Platt Amendment, after the riots caused by the fraudulent reelection of Estrada Palma, period in which Charles Magoon served as military governor, from 1906 to 1909.

Removing the statue of José Miguel Gómez would be like erasing him from the annals of History. It is like playing the very same game of the Cuban regime when every time that a well known athlete or a popular artist decide to change course and flee the country, they are removed from all lists, banned on radio and TV, and turned into non people, as if they never had existed.

So, what’s the game being played? I think this opportunity could not be more propitious to get to know, in case that anyone does not know already, the caliber that our leaders are made of, and the degree of responsibility they have for the permanence of racism and the exclusion of blacks and mestizos in Cuban society.

The statue is where it belongs, as is that of José Francisco Martí, the son of the Apostle, who was second in command, under General Monteagudo in the racist massacre of 1912, which was solemnly inaugurated by the Historian of the City, Eusebio Leal, at the Martí Studies Center, but without his saying that José Francisco cut off black’s and mestizo’s heads too.

The historical perspective given by the regime, for blacks and mestizos in Cuba, is distorted with the objective of planting within this part of the population, hatred from the past, doubts, and a terrible fear for what may happen to them when the current system disappears.

You can criticize and question the improper conducts of José Miguel Gómez and José Francisco Martí, but you can never deny their existence.

The History of the nation would be incomplete if they were not included, even though it is painful to us, and we understand it as unjust.

However, keeping the statue of José Miguel Gómez, which I definitely agree with, as well as the statue of José Francisco Martí, without raising a few statues for the men and women of black skin, who, with more than enough merit, must be taken out of the historic insult, clearly shows how this regime, just like all the previous ones, has always denied: its racist nature and the classist commitment to ensuring that Cuban blacks and mestizos remain in the bottom.

These are constant symbols of impudence and fear for blacks, who are not the ones who should be embarrassed. There are titles that must cause embarrassment to those who carry them, as well as to those who create them.