In the city of Trinidad in central Cuba, in a beautiful colonial house, carefully renovated, located on Royal Street (renamed by someone “Jesús Menéndez”), there is a true safe-deposit box of the national cultural heritage. The spacious house, built in a U-shape, with a central courtyard bounded at the end by a high stone wall and flanked on both sides by numerous rooms, shelters furniture and brass beds from the eighteenth and nineteenth centuries, but more interesting still are the dozens of religious images of all shapes, sizes, styles, and materials–properly restored or in process–that it holds.

Its owner, a Cuban concerned about losing them to predation by nationals and foreigners who would turn them into ready cash, was given the noble task of rescuing them from private homes caught in the societal whirlpool, and from churches destroyed or abandoned in the territory, by arranging to buy them (often paying more than what had been offered by prospective buyers) from those who owned or kept them, for the sole purpose of preventing them from being taken out of the country, legally or illegally, so that Cuba would not lose this precious treasure. To achieve this, he has used some of the proceeds from the sale of his works of art, since we are talking about an internationally renowned painter, who lives outside the country, and who, quietly, as advocated by José Martí, has done and does more for the national culture than many who appear daily in the mass media touting their defense of the national identity. 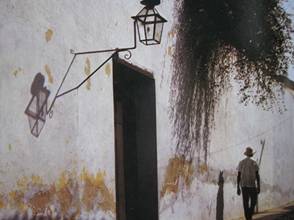 Take the house back in time to the colonial period and you will find rooms full of pictures, placed in the most diverse spaces, both at floor level on the walls or hanging from the ceiling, as well as finding them anywhere (living room, dining room, bathroom, hallways), many life-size, forming part of the family of the artist who resides there, giving them protection and maintenance.

This cultural wealth — accumulated over the years, restored, maintained with dedication and care, and saved from destruction — waits for the coming days of the re-founding of the nation, to return to the old churches then rebuilt, or to new ones, or to become part of the foundation of a religious museum or institution.