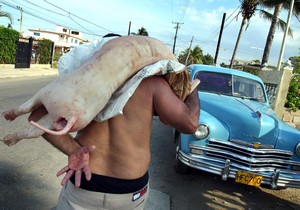 Diego, 35, already has a plump pig nearly ready to grill in his backyard in the village of El Calvario, south of Havana; an army of bottles of rum and half a box of Cristal beer. But his money didn’t stretch far enough to buy candies and grapes.

“As I like, it will go well. As a family, eating roast pork and drinking rum and quality beer. Tin Cuba, it’s enough,” says Diego, self-employed. His family came from Sancti Spiritus province, and they have always celebrated Christmas Eve. With or without trees. Approved or not.

Like Diego, a majority of Cubans are preparing to celebrate Christmas. Although they have to open their wallets. People do it with pleasure. December is a month of taking stock. And the tradition of sitting at a table where they have saved all year for the food — large pots of rice, black beans, tostones, salad and tomatoes, and a tray full of roast pork– is sacred to Cuban families.

Even in the hard years of the ‘Special Period’, a war economy that has lasted 22 years, people managed to celebrate Christmas. For years, when Fidel Castro suspended it in 1969, claiming it was more important to be working in the sugar cane fields that to be with family, Christmas was abolished by decree. Naturally, many families made fun of such regulations. And in the cool nights of December 24 they celebrated Christmas, listening to bolerones, pinching pork rinds and drinking rum made from sugar cane.

The Castro regime was acting cynically. Do as I say not as I do. I remember the house of Blas Roca, leader of the Cuban communists before 1959, close to my family on my mother’s side, celebrating Christmas in high style.

Imported wines, grapes, candies and roast pork, among other delicacies.

Not infrequently, Castro arrived at the stroke of midnight with his everlasting olive green uniform to hang out with Roca and deliver his typical upbeat chatter, to which we all had to listen quietly. The leader spoke.

That double standard is typical of Cuban society. The law is for others. It is not for the ruling caste. Thus we see ‘illegalities’ such as cockfighting, having a satellite dish, unauthorized internet or travel abroad being forbidden for ordinary Cubans. But the mandarins skip these rules.

With the holidays they did the same. People set their trees in a secluded corner of the house, so that the lights would not betray them, while our ‘sacrificing’ leaders let it shine out the windows on Christmas Eve.

It was a December 25, 1997 when in tune with the visit of Pope John Paul II, Castro understood that Cuba was a Western society. Since then the Cubans, on this date, decorate their houses with Christmas gadgets. Each one as they can. And December 24 has become a special night, where families and friends gather and wish each other luck for the new year.

The official media offer no comments or publicity about Christmas. Although hard currency hotels, shops and restaurants put up Christmas decorations. This Christmas will be no different. Despite the crisis. Already the markets, both foreign currency and Cuban peso ones, happily sell the goods. Pork these days is more appreciated than ever. And more expensive.

A pound is sold in the farmer’s markets for 24 pesos. Pig raisers are up and coming. “Some people pay one convertible peso (24 Cuban pesos or just over one dollar) per pound for pork feet,” says Roberto, who in December usually sell between 15 and 18 pigs.

Some buy wines. It depends on the pocket. The better off acquire a Spanish red. The precarious Cuban wines. They’re bad but they’re our wines. Although it is customary to find quality rum, some whiskey, sent by relatives across the pond, and beer. Nougats decorate Cuban holiday tables, along with some homemade sweets. Spanish nougat in hard currency cost from 3.10 to 5 CUC, the biweekly salary of a worker. Some families with resources put presents under the Christmas tree.

The churches are crammed to hear the midnight mass. At midnight, people throw buckets of water and they embrace. Many take the opportunity to wish for more profound changes in their homeland. And that Cubans, overlooking ideological differences, draw a future strategy for the nation. That we embrace and respect all.

December gives no truce. You have to save money in the piggy bank to buy toys for the children on Three Kings Day, just around the corner, another of the traditions rescued by ordinary Cubans. But that’s a story that deserves to be told separately.