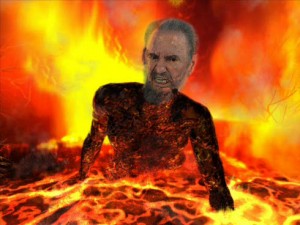 There are pathetic and laughable reports, which seem to be the result of manipulation and the desire to perpetuate at all costs by certain figures of the state, without looking at their reflection in the mirror. This is the case of Fidel Castro being in the Guinness Book of World Records for being “the person who has most often survived assassination attempts,” a total of 638, as reported by the official website Cubadebate.cu, and picked up by the international media days later.

The review supports the negotiating power of the legitimizers of the retired tyrant, who didn’t manage to get the Nobel Peace Prize for the ailing warrior, but managed to slip his name into the Guinness book for 2011. Something is better than nothing, right?

The whole thing is laughable because the cubiche authorities didn’t even mention the awarded Guinness records, despised as frivolous and decadent by Fidel Castro himself, who designated his brother Raul as his successor after 47 years of ruling the island as a medieval fiefdom (1959 to 2006).

Before the funeral record of F. Castro, movie lovers will remember the actor Bruce Wells and his amazing fight for life in Die Hard.

Before the mortuary record of F. Castro, friends will be remembering the movie actor Bruce Wells and his amazing fight for life in the film Die Hard. Meanwhile, fans of mathematics, aided by a calculator, will look at the accounts. If the failed attacks are true, someone tried to send the Caribbean patriarch to hell approximately 13.7 times per year in fewer than five decades, which is equivalent to 1.13 times a month and 0.03 times a day. Tough old guy, eh!

There will be no lack of those who now evoke the adventures of Pinocchio and his immersion in the belly of the whale — the CIA for Castro. So many of the followers of the rationalist Descartes will be smiling with disdain thinking of the hypothesis of absolute doubt.

Because it is difficult to imagine a subject with more lives than the cat, some will think of a kitty in a municipal pound, which he would need more than nine lives to steal the dogs’ food without suffering an injury, as F. Castro, unlike general of Independence Antonio Maceo, does not exhibit even a scratch despite his military adventures and long stay on the throne.  Would they have asked for a certificate of injury by some of the 638 attacks?

If memory serves, the new Guinness Prize Winner is an amazing guy. Who does not remember his invention of dwarf cows that gave more than 200 liters of milk a day? Or his successes in the country’s sugar production, which reached a million tons per year instead of the prior eight million and reduced the number of sugar mills from 163 to 42. Or the Commander’s effort to replace the production of fruits and vegetables by the daring plan to grow coffee in a “Havana Cordon,” though coffee refused to germinate in Havana. We recall that the “historic leader” concerned about citizen order, multiplied the number of prisons on the island from 14 to 200; he reduced the cattle population of six million head to just one million, a triumph comparable to the taking over of the countryside by the marabou weed and the disappearance of thousands of opponents and rafters so he might govern without problems.

Yes, in addition to Tribune of the People, Ineffable Wizard and Universal Prophet, Fidel Castro was a tough guy to kill. He was so secure that he walked around the island with a regiment of guards and snipers. When he traveled abroad he took his own bed, food and the palace cook, rented three floors in a luxury hotel and brought along hundreds of bodyguards in a plane bigger than his. Could that be why the bad guys from the CIA forgot about him in July 2006?