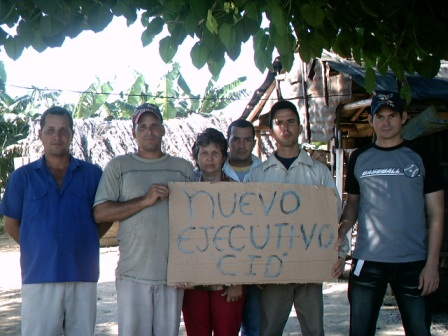 In the presence of Rolando Pupo Carralero, President of the Committee of Free Peasants of the CID, a new executive was nominated and an electoral commission appointed composed of Luis Alberto Hernández Marrero, provincial delegate, former political prisoner Pedro Luis Hernandez Rodriguez and Ermes Rodríguez Blanco, who after counting the votes proclaimed as the new executive of DIC in the town head of San Juan y Martinez municipality:

The provincial delegate congratulated the new government and encouraged them to work together, strengthening the organization and growth in the area.

In the name of the Secretary of the National Executive Committee of the CID a moment of silence was announced for Laura Maria Labrada Pollan, followed by prayers for Laura Pollan founder of the Ladies in White and ending with the reading of the Declaration of Caracas.