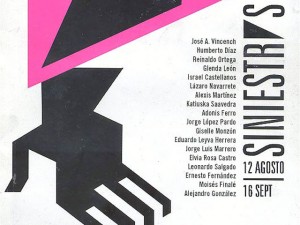 From August 12 to September 16 in the Havana Gallery, located on Linea Street between E and F, Vedado, is a presentation from a motley group of artists that have in common the fact that they are left-handers, which justifies the title — Sinisters — and the Manifesto of the left-handed artistic Cuban artistic or the sinister visual Cubans, an unusual documentary, sharp and satirical, written by lefty curator Israel J. Leon Castellanos, who recalls that the opening coincides with the International Day of the Lefty, instituted Aug. 13, 1992 by the club concerned.

According to lefty curator Clarissa Crive “the participating artists burst on the different mediums and contemporary manifestations. The installation, video, photography, drawing and painting unleash creative positions that redraw the many issues in society that have been treated by these artists.”

According to Clarisa, Sinisters shuffles the questions and dilemmas about the subject “From the playful, this exhibition project seeks to establish a dialogue with the many facets of artistic discourse of left-handers in the sample involved. Its poetic face, among others, risks, the pay off with debts to history.”

Among the lefty exponents are, in addition to the mentioned Israel Castellanos León, author of Manifesto of the left-handed artistic Cuban and of the installation Spirit and letter; Joseph A. Vincench, creator of Exile V, a vinyl bag of soil of 10 kilograms to set the map of Cuba, as a travel bag. The remaining installations are from Humberto Diaz, who deployed 150 meters of rope around the room, spliced wood, cloth and rubber, which thread human existence; Reinaldo Ortega who mounted a photographic collage — In the same glass — as an expressive revealing nuances of reality, with a predominance of the golden sepia of the Cuban libre and red wine of Sangria.

If Castellanos alluded in Spirit and letter to the need for lefties to revolutionize a world designed for the right-handed, Alexis Martinez in Libre reaffirms in wood the idea of the threat to Western culture due to the protagonism of the masses.

The video installations are from Glenda León, whose exhibits Investment, of five minutes and allusive of Cuba, is about the absurd gesture of bankers and money collectors who snort coca leaf; while Katiuska Saavedra with Promiscuity, a scene of a girl urinating into a public bathroom, proposes to overcome conceptual barriers to the environment. In The public of the private J. Luis Marrero takes off from hands to infer certain visual codes of reality. 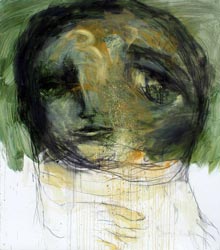 The mixture of the artifices of the opposite hand surprises visitors with various other pieces such as the sculpture Mourning, that huge machete of Lázaro Navarrete that alludes to antagonism as a catalyst in the history of Cuba. We caught Jorge Lopez with Z, digital printing on an egg carton, where one is different, black, and infers the concept of left-handedness; while Giselle Monzón insists in left-handedness with the piece that gave its title to the show — Sinisters — and Eduardo Leyva Herrera displays Air Dreams, a collection of prints of young faces in twelve panels, made of aircraft header covers of several lines donated by friends living in other countries.

The visual challenge of native lefties includes Alejandro Ríos González with Cuba, year zero; Moisés Finalé, creator of Inside of him, Ernesto Fernandez and his anxious Fuck!; Leonardo Salgado and his board of Cuban currencies that induce differences and borders; Adonis Ferro with the canvas I feel but don’t say; and the sarcastic Elvira Rosa Castro’s — last name fo the leftist in chief, and ex southpaw born on International Lefty Day, inventor of Tax Free. Sale of ideas, made from vinyl on acrylic.