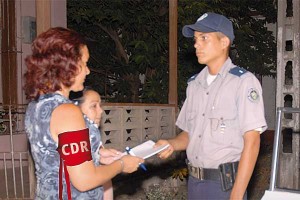 HAVANA, Cuba, September, www.cubanet.org – In the same way that a blind woman with scales is an allegory of justice and a skeleton with a scythe is the allegory of death, the image that identifies the CDR should be the allegory of betrayal.

The creation of the Committees for the Defense of the Revolution in Cuba was a Machiavellian political monstrosity, conceived to reveal and suppress all forms of opposition to the nascent Communist dictatorship.

“We will establish a system of Revolutionary collective surveillance, and everyone will know who lives in the block, what those who live in the block do, what relations they had with the tyranny [of the Batista regime], where they work, who they meet, and what activities they get involved in.”

Those were the words of Fidel Castro, spoken on September 28, 1960. The apparatus of the most formidable surveillance and repression of the Communist dictatorship began to take form, implemented by the rebels in January 1959. 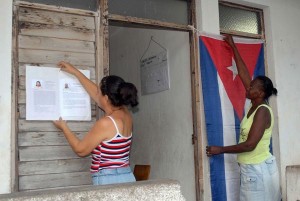 The scapegoats to justify its creation were the same ones the government has used ever since: imperialism and the opposition.

“We can say that the Committees for Defense were engendered in the public square, in the midst of the struggle against imperialism, in the heat of battle and the insolent noise of the counterrevolutionary bombs,” Fidel Castro once said.

But creating such a massive apparatus of betrayal and repression could not be the work of a night of fireworks. The people of Cuba already knew well the sound of those explosions, thanks to the terrorism work of the rebels themselves led by Fidel Castro over the whole of the island to destabilize the dictatorship of Fulgencio Batista.

It was, however, a well-conceived plan and organized in the style of Hitler, to make massive political denunciation the ultimate weapon against dissent.

The CDR has been, in addition, the shock troops against opponents. Beatings, threats, psychological terror, destruction of property. Each and every one of these methods have been used systematically against active opponents.

The people’s mob, which is not all Cubans, has found in this organization an oasis of impunity to unleash their passions when they are incited against their neighbors.

Criminals and corrupt officials, however, have had better luck. The CDR doesn’t watch and betray them with the same frequency as it does the opponents. Among them and the organizations of the past there has always existed a kind of symbiosis, where many times it is the money from the crimes and corruption that have paid for the pigs’ heads and the drinks for the street parties, where they celebrate the birth of this organization.

The wood for cooking the stews burns again this September 28th on the streets of the island, like the fires of the inquisition burned the heretics. This is the 53rd birthday of a Castro regime organization dedicated to political betrayal, or as we say here in Cuba, to snitching.