14ymedio, Mario J. Pentón, Cancún, México | September 28, 2018 — The wind was barely blowing and the humidity was unbearable. Outside Terminal 2 of Cancún’s international airport, Juan Ernesto waited for his brother, who was arriving aboard an Aeroméxico flight from Havana. It was Jonathan’s first time abroad. His purpose: to buy some basic essentials in order to resell them on the Island.

“What Cuba is most lacking right now is hygiene products. Basic essentials like disposable diapers, soap, toothpaste, shampoo, and conditioner,” explains Juan Ernesto, who asks for his surname to be omitted out of fear that authorities will confiscate his purchases.

Traveling as a mule to supply the growing underground market on the Island is not legal. Cuban customs has begun an intense campaign against those bringing products to resell them. Even so, Cuban travel to countries like Mexico, Panama, Russia, and Guyana is increasing.

According to statistics provided to this newspaper by Mexico’s Tourism Ministry, in the first half of this year the number of Cubans landing in that country grew by 60.5% compared to the first half of the previous year. As of July of this year, 69,105 arrivals to Mexican airports were recorded, 26,050 more than in the same period of 2017.

In 2016, there were slightly more than 100,000 entries of Cubans because of the migratory crisis. With the end of the wet foot/dry foot policy decreed by the United States at the beginning of 2017, the flow decreased but remained above 83,000.

“Getting a Mexican visa is difficult,” explains Juan Ernesto. Among the requirements set by the Mexican consulate in Havana is having a bank account that demonstrates economic solvency, a property title belonging to the interested person, and filling out a visa request online.

“Most of the time the website where you arrange the appointments isn’t working. Our visas cost around $3,000. Corruption is the order of the day in Mexico just as much as in Cuba,” he adds.

At the airport’s exit various taxi drivers offer their services. “Minivan! Minivan for 100 pesos!” yells one in the direction of a group of Cubans.

A network of businesses has been developed to serve the numerous travelers arriving from the Island. Low-cost hotels, stores that accept dollars, Mexican pesos, or Cuban convertible pesos, shipping agencies, and even job offers can be found in the Benito Juárez municipality, which the city of Cancún belongs to.

“Here there are a bunch of stores with Cuban owners where many people from the Island work. You can find anything they sell in Cuba there: clothes, electrical appliances, medicine, hygiene products,” Juan Ernesto explains to his brother.

“Right now in Cuba deodorant is hard to find. Here we buy Gillette tubes for 3.50 and we sell them there for double. Little perfumed balls for clothing cost 255 Mexican pesos (about $14) and you can sell them for up to triple,” explains the young man. 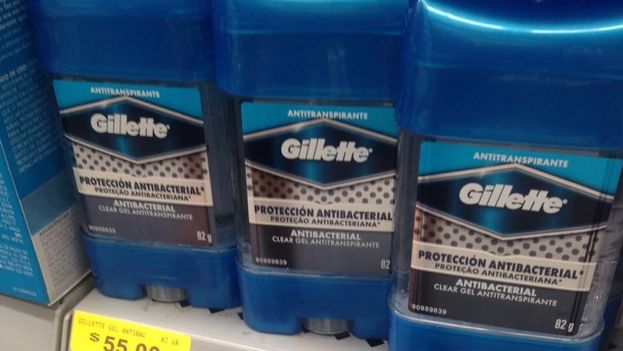 Right now in Cuba deodorant is hard to find. Here we buy Gillette tubes for 3.50 and we sell them there for double. (14ymedio)Jonathan is 25 and is finishing an engineering degree. His trip to Mexico is only for a weekend. He wants to follow in his brother’s footsteps, who thanks to the constant trips to resell products and to the self-employed work that he carries out on the Island, has a greater purchasing power than the average Cuban.

“In Cuba the Government doesn’t realize the opportunities that are being lost. It goes after self-employed people and is dedicated to a model that doesn’t work. Each of the Cubans who comes to Cancún brings at least $1,000 to spend here. That’s money that businesses on the Island are losing out on,” he says.

The young man laments that an engineer’s salary barely surpasses $30 a month, while a reseller can pay for an airplane journey and leave the country.

But it’s not going so well for all self-employed people. Some even opt to try their luck in countries like Mexico, where the daily salary is well over what they would make in Cuba in a month.

Annia is a young Cuban woman of 26 who lives in Cozumel. After various trips to Cancún, where she would buy products to bring to Matanzas, she decided to stay to work as an undocumented person.

“In Cuba I was working as a hairdresser, but with that I couldn’t get ahead. Everything that I earned went to the high cost of products and to paying bribes to inspectors,” she says.

When she had the opportunity to visit some relatives who live in Cancún, the young woman decided to remain with them. Since then she has lived in this city for three months and has worked as a waitress, salesperson in shops for Cubans, and street vendor.

“Right now I’m applying for my Mexican residency. It has cost me several thousand dollars but it’s worth it,” she says. According to Annia, the owners of the restaurant where she works are delighted that she is Cuban because it specializes in the cuisine of the Island. In addition they sell tobacco and rum.

“I haven’t felt discriminated against at all, just the opposite. People here know that we Cubans work hard,” she adds. Annia earns about eight dollars a day in her position as waitress, and she is happy because she has more opportunities to better herself than in Cuba. “At the beginning it’s always necessary to make sacrifices. I work nights and early mornings so that the immigration police don’t find me and I live with a friend to pay half the amount in rent ($150), but it’s worth it.”

“When I have my papers I will be able to work in a hotel like the other Cubans do or start my own business. I’ve already been able to send some money to my family and in the future I hope to bring them here to live with me,” she says hopefully.