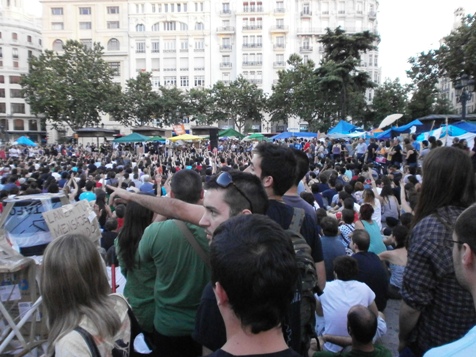 I had the exceptional opportunity as a Cuban islander to see the Movement of the Outraged in Spain. To tell the truth, they didn’t appear so outraged; they were, indeed, eager to improve their society, spoke in an organized way; the public waved their hands in the air for acceptance or turned their hands over in disapproval. In Valencia, in addition to being at the principal headquarters, I was at the meeting at Cabanyal, a poor neighborhood, but poor by European standards, very interesting; in that movement I saw the stamp of genius. And as has almost always happened, the demands of this movement will result in an improvement in their respective societies, open and eclectic.

In Cuba there is every reason to be indignant, although there are those who think it’s enough with the “outraged” or 1959. Those octogenarians should have retired long ago. Before history, the good that could have been provided will have to compete with the mountain of broken promises, or errors, of volunteerism.

In a society such as ours, no similar initiative could be formed without being discredited by the government as having secret ties with the United States. It’s amazing how one perceives the disappointment on the surface of society, but there exists fear and the people don’t want to be categorized as the puppets of another without being so. One of the achievements of the past half century has been the general paranoia of seeing microphones and G-2 agents at each step, believing that Big Brother is watching us. After this, no one wants to become indignant beyond the everyday catharsis, individual and anonymous.