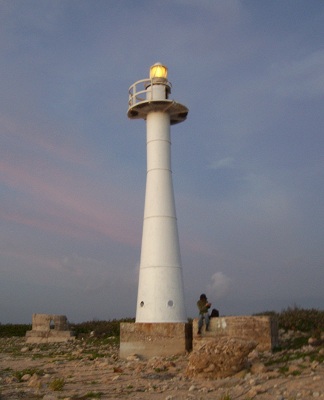 A lighthouse at the entrance of a bay: a sexual metaphor, or a social one, if we see the bay as part of that Cuba that isn’t fertilized, even if the lives of millions of Cubans have been spent in an attempt to make it fertile.

This lighthouse does shine; not like the resumes of the army general and his officers, in which are divined the economic and social long night they promised to patient Cubans. It’s not a bad lighthouse nor is it like the mists that raise the unanimous applause of the still mute Parliament, or the journalists’ repetition of those numbers only useful to spotting the rear ends of the millions on the island who don’t even have money to buy toilet paper.

The same day that the current president of the Republic talks about the deteriorated civic values, the monstrous malformations in the conduct of Cubans, of cancers of the spirits that grow as much as the economic problems, his police shamelessly mistreating and arresting peaceful people who confront them only with civic values. What did he talk about then?

Because of this I don’t believe the current president. So I am publishing this photo of a lighthouse where I arrived after a dawn of mosquitoes, at the entrance to Manatee Bay, in the north of Las Tunas province. A lighthouse is my own metaphor that there are indeed sure ways to improve this island without the trauma of an infinite reform that hasn’t made us the slightest bit happy here.

Of course it’s not easy to get there: by the dark mountain path there are guards and trails to get lost in, but it’s better to walk with a bad helmsman and an old map. Those who still insist on guiding us with the same mistaken lighthouses as always, the fairy fires that lead us again and again into the reefs or the swamp.

Now, what we need are not more energetic or exhaustive speeches: we need to rectify this bad light and build our own lighthouses, new goals and distinct paths other than those designed in the offices upstairs, to see if, sometime, something really changes down here.

New and true lighthouses, for this island that at the same time is a drifting boat and the promised land. It’s what we are trying to do.