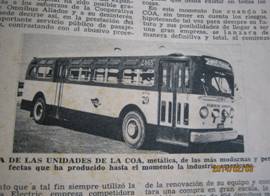 It is no secret that passenger transportation is a national problem, which for years, rather than being solved has gotten worse. Right now it affects virtually every city in the country and in the capital, with two million inhabitants, it is a daily headache for citizens who depend on it — the majority — to move from one place to another for reasons work, study, health, recreation, personal or otherwise.

No State measure nor any plan has been able to resolve it: always lacking are buses, spare parts, maintenance, mechanics, tools, repair shops, conductors, etc. All this is complemented with organizational problems, corruption and lack of control. The excuses have always been present and, when they have failed, they have thrown up their hands and blamed the “blockade,” the permanent scapegoat with which the authorities hide their inefficiency.

Ultimately, in the so-called “updating,” [of the country’s economic model] there’s talk of organizing bus cooperatives, but keeping the main transport and buses of these cooperatives as State property.

We don’t need a fortune teller to predict complete failure. In Cuba, however, there is a valuable historical experience of efficiency in this area: The Bus Partners Cooperative. Taking it into account would be smart.

In April of 1933 — a difficult year — the small bus owners, then dispersed, decided to join together in a civil association, to reconcile their interests and defend them. In the beginning, the association had limited resources, but this wasn’t an obstacle to creating their formidable cooperative effort, which allowed them to take responsibility for providing a vital public service.

In the last year of its existence, before being taken over by the new government, they owned more than 1,500 buses in service, serving different routes, which covered practically every municipality and neighborhood, with frequencies between three and seven minutes. They had terminals, repair shops and mechanics who maintained and repaired the equipment, serving 70% of the transportation — the remaining 30% was served primarily by Autobuses Modernos S.A., a company created to replace the trams. The cooperative had 12,000 workers and contributed to the pension fund with 2.4 million dollars annually.

All this wealth and experience, created over years of hard work, was lost, and they tried to replace them with different socialist monstrosities, all of which failed.

To turn the public transport system over to a cooperative system could be a good solution to offering better service, but to achieve real results, the ownership of the means (buses, shops, terminals, etc.) must be in the hands of workers.

These stunted cooperatives try to reinvent dying socialism, where the members are not the owners of the means they need to work, they are a negation of themselves. The obsolete mentality of only leasing the means to the cooperatives, with the objective of transferring responsibility to the citizens while maintaining, at any cost, the umbilical cord of State ownership, has to be banished, if, in reality, they want to solve the problems.