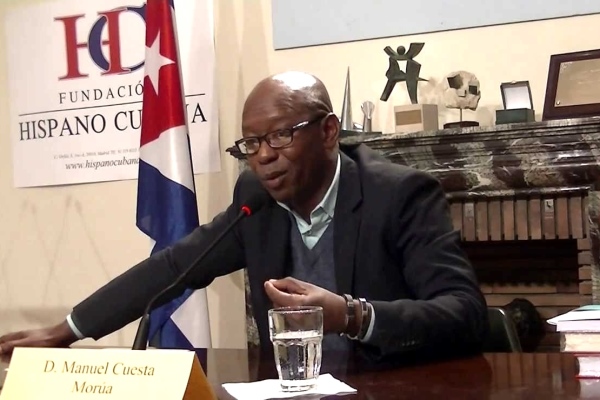 HAVANA, Cuba — On the night of January 30 Manual Cuesta Morúa, spokesperson for the Progressive Arch Party and coordinator of the New Country project, was finally released after several days of arbitrary arrest which was a part of the repressive wave unleashed by the Cuban authorities in relation of the celebration in Havana of the Second Summit of the Community of Latin American and Caribbean States (CELAC). Threats, undisguised persecution in the street, dozens of arrests and cases of regime opponents besieged, were all a part of this escalation that reaffirms the panic of the State that derives from the lack of political and moral reason that afflicts the Cuban leaders.

The opposition leader was arrested on a public street on Sunday, January 26, when while touring the city to finalize details for the Forum Parallel to the CELAC Summit, organized by several opposition organizations in coordination with the Center for  Opening and Democracy for Latin America (CADAL), whose director, the Argentine activist Gabriel Salvia, was arrested on the afternoon of Monday 27 at Havana airport and expelled via El Salvador. Cuesta Morúa was transferred to the Fifth Station of the National Revolutionary Police on 7th at A and 62nd in the Havana municipality of Playa.

For several days the Social Democratic leader underwent numerous subsequent interrogations and threats by several top officials of the political police. According to the testimony of Cuesta Morúa, the law enforcement agents were very irritated by his convening and hosting the Forum in parallel to CELAC, and pressured him to abort the call in exchange for his release.

On Thursday the 30th, the recently released independent lawyer Veizant Boloy — who has been arrested on the afternoon of Monday the 27th — became engrossed in the development of a Habeas Corpus petition which was finally presented at the Provincial Court of Havana at noon by Gloria Llopiz, Cuesta Morúa’s wife.

In the afternoon several leaders and activists appeared at the Fifth Station accompanied by Cuesta Morúa’s mother, with the intention of gathering information, interviewing the detainee, and pressing for his release. After more than four hours of fruitless waiting without being able to see her son, Mrs. Mercedes Morúa was dismissed with the promise of the quick release of the opposition leader.

Opponents gathered outside the police station remained in constant contact with international media and institutions interested in  Cuesta Morúa’s situation, and propelled the global campaign for his release, not believing the false information supplied by the agents of the People’s Revolutionary Police on the alleged release of the detainee.

Before being finally being released in the evening hours, Cuesta Morúa is informed by his captors that he will be criminally prosecuted in Case No. 5 of 2014 for the alleged crime of “dissemination of false news against international peace,” under the weak argument of several articles and texts published by the opposition on racial and academic problems in Cuba, which, according to the official, distort the Cuban reality and “the work” of the Revolution in support of racial equality.

A precautionary measure was imposed requiring Cuesta Morúa to report his  presence each week at the same police station where he spent several days under arrest, which by the way will prevent his meeting various political and academic commitments abroad. This is an unfortunate consequence of this new judicial arbitrariness, in fact unsustainable by the weakness of charging arguments which fall apart before the Cuban reality and the strength of the increasingly growing challenges in this sensitive and complex issue for the present the future of Cuba.

The unjust detention of Cuesta Morúa generated a worldwide wave of revulsion against the intolerant and hypocritical behavior of the Cuban authorities, who, in the plenary of the Summit of CELAC, spoke of respect for diversity and pluralism, while in the streets they unleashed a frankly fascist inspired repression.

Recently there have been many expressions of sympathy and support that have come in various forms from many parts of the world as a sign of increased sensitivity to Cuba’s complex reality that is generated in the democracies of the world and in contrast to the indolent and complicit attitude of the vast majority of democratically elected presidents at the CELAC Summit.