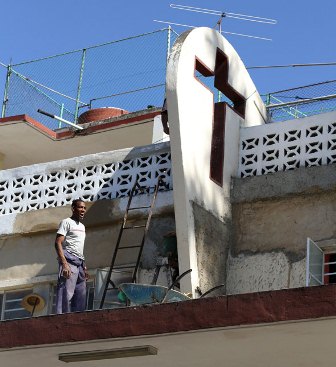 Right now in Cuba we are waiting for the second visit of a Supreme Pontiff to this country after the Revolution. It must be because of this that after the TV news they aired the words of the Cardinal, and documentaries about the relation between State and Church. They are preparing, as always, the consciousness of their more naive viewers about how any event should be interpreted.

If there is something I like in the Book of Job, in addition to all the poetry of the text, it is the end. Not only in the first and second speech of God to Job, but also in that little verse I liked before discovering that Lezama also liked it: Why does it rain in the desert where there is no man? I also like the end where the Job’s friends who had been talking about God easily enough could not describe it.

And that leaves me thinking of the same question God posed to Job, that Lezama and I asked: Why does it rain in the desert, where there is no man to perceive the rain?  It fills me with joy, it makes me laugh from happiness! Because all these reverends and ministers can not cover God with the building of the tower of Babel. I don’t know if I am explaining myself: the reverends the cardinals speak of God, they quote the Scriptures.

What they know of God is limited to his speeches, especially because after they laugh thanks to the powerful of this world, they turn their backs on the victims, those dying of hunger, the imprisoned. My Christ is real and is perfect, he makes it rain in the desert where no man who perceives that rain.

Not everyone who says: “Lord, Lord,” will enter the kingdom of heaven, but those who do the will of the Father in heaven. The sky fits in the heart but you have a heart to reach the sky. If the Catholic Church does not recognize the cause of the Gladiators in White, the living death of the Cuban people, it is not in the image of Christ, because it will ignore those who are suffering, the be the Catholic Church for the “decent” people, of the families who do not beg the priests for alms because they suffer from lack of money.

You can not expect too much from men. The apostle Paul himself gave an account in some of his letters of all those who had had abandoned him. You have to truly seek God. The apostles must have been very special people, in that moment in history, to have been able to create a language for talking about God, about the experience of Jesus Christ, where they could have had language that over the centuries would not kill, but awaken, the experience. A resistant language.

Meanwhile, it is still raining in the desert where there is no subject that perceives it and constructs a discourse. That rain is real even if it has not been expressed by anyone. It will be expressed.