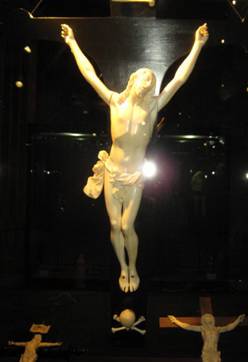 The visit of Benedict XVI has raised a number of disputes and derogatory comments by one portion of the population. In fact they have been seen in different neighborhoods of the city tearing down and scribbling over the posters alluding to the visit, something that did not happen with John Paul II, who created so many expectations of hope and made the Plaza vibrate with spontaneous shouts of freedom, that not even the presence of the always feared security agents infiltrated there, could silence.

I think all this reaction has been motivated by statements from the spokesman for the Vatican and the Catholic Church in our country, that the Pope thought of meeting with Fidel (who is no longer head of state) and not with the Ladies in White or any other representative of the emerging Cuban civil society, because of his busy schedule.

However, today these views began to change somewhat due to the recent remarks of His Holiness, during the course of his trip to Mexico, when he said that Communism has been shown to be a failure, and that only the Church could be capable of leading Cuba through non-traumatic changes. I am in complete agreement with this. No one wants for our people, tired and worn out by the slow and daily suffering of these past fifty-two years, a solution that involves bringing more grief and misery to those we already have.

I think the Church has the opportunity to play the role it has played so timidly, and once and for all to stand at the side of the suffering Cuban people. It is an opportunity that the highest hierarchy has to take on the role of Pastor of this scattered, hurt and skeptical flock, helping it to find and rescue the true path, which is none other than the deprivation of freedom for more than half a century .