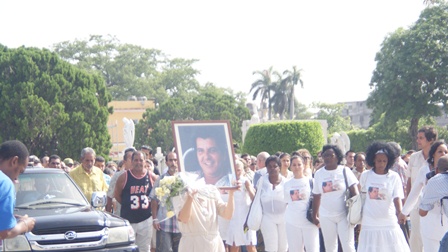 The procession starts again after a few minutes of resistance under the burning sun of the nation, Rodiles, Aleago, Guillermo and others already on their way to the jails. The line of vehicles follows the avenue in Cerro crossing a cordon of police and agents form the former G-2 that divide the crowd to let them pass, or stop them: who knows, the balcony of a house visible where Peñón Street intersects the Avenue is full of people.

One of those in the blue uniforms with white stars on his shoulder pushes someone who crouches like a frightened sheep. The hearse has disappeared and an anarchic automotive Formula One chase begins. Presumably the driver of the hearse has been given the order to minimize the travel time as much as possible, under threat of social exclusion with the accusation of being a mercenary in the pay of a foreign power, this when they haven’t swapped him out for gunman starved of dignity.

The caravan consists of various cars that gun their engines in hopes of not being the last of the Mohicans. On 23rd Avenue at the top of 14th Street, I think, a Soviet-made Moscovich car dares to interrupt the regular traffic to make way for the procession, thus assuming the negligent ethics and responsibility of the motorized blue uniforms. The entrance to the cemetery was protected or attacked by restless soldiers ordered to continue ahead, finally the hearse appears again having won the last stage of the Revolution: the fear of the dead.

A nun takes a large photo of the leader for democracy and human rights and carries it on the front of the hearse, while a chain of bodies holding hands extends to both sides of the nun. The torrid sun embraces the skulls devouring the shadows and the skin mourns its compassionate entelechy in the spoils of time, we go to the banks of a sacred river of crystalline waters.

The Lord is my shepherd, I shall not want, he maketh me lie down in green pastures. 23rd Psalm

The funeral march begins at the cemetery chapel.