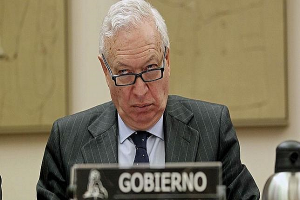 Jose Manuel Garcia-Margallo, Spanish Foreign Minister, believes that the European Common Position towards Cuba is correct, but can be more flexible

HAVANA, Cuba, March — Latin America and now the European Union approach the Cuban dictatorship without great demands. Respect for fundamental rights, as a requisite for closer relations with Havana passes to a more distant plane than previously.

The priority is to guarantee the survival of the regime as an assurance of political stability within the Island, and maybe to manage a soft landing towards some form of less authoritarian government. It is risky, at the very least, to say that the end point of this journey that is barely beginning is democracy with all its attributes.

Single-party socialism is not going to disappear from Cuba because of a civilian-military revolution. Neither does it appear that its end is associated with a negotiating table formed by people of the current regime, the Catholic Church and the opposition groups. If history grants the possibility of such a scenario, it would settle for when the heirs of the gerontocracy assume control at a time impossible to determine.

Whoever says to the contrary is, as they say, lost in the weeds. The weakness of the opposition, in a social climate where anarchy stopped being exceptional some time ago, is a reality that counts when the time comes to define policies. Of course they are not the only motivations, but there is no doubt that they have contributed to things flowing in favor of conservative pragmatism.

To this one would have to add the little importance of our country in the geopolitical order. Without great economic attractions or strategic relevance for the centers of world power, the topic of Cuba dissolves between indifference and the castlings of very specific interest. Nothing of commitments with respect to a political evolution that overcomes single party rule and the impossibility of exercising fundamental rights without conditions. That would come associated with the development of economic openness.

The only government that maintains a policy of confrontation is the United States, although of little benefit for advancing the pro-democracy agenda. The embargo increasingly loses effectiveness following a moderating trend that includes important sectors linked to the politics and economy of this nation.

At times it seems that the incidents of abuse perpetrated by the regime fall on deaf ears. Except for a few non-governmental organizations, the majority of governments remain impassive in the face of statistics about arbitrary arrests, acts of repudiation and prison sentences for political reasons.

Resignation would not be a good option facing the sequence of irrefutable facts, but also one has to be careful about romantic visions.

A deep reflection about the circumstances is necessary. The opposition and the members of alternative civil society that do not do it will fall by the wayside. One must insist on efforts to be more creative and to eliminate the recurrence of old errors that continue burdening the pro-democratic plans.