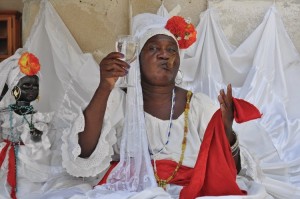 Daniel, 39, made a trip of 6,000 kilometers from Spain, to hacerse santo’* in Havana. He bought a low fare ticket from Iberia and brought in his wallet his savings from ten years as a computer programmer.

It all started one night when he was reunited with a childhood friend. Things were going well with the man. He was wearing brand name clothes. And driving a 50,000 euro Mercedes.

After a few drinks, he told him that had progressed thanks to the ’santo’* he realized in Cuba. “Things looked black for my friend. On some vacations on the island met his current wife. Her mother was a priestess. And convinced him that when he made a saint’* things would change. And they did change,” says Daniel, who instead of making the Road to Santiago, he decided to to Havana, hoping to have the same fate.

According to his account, he lived a fucked life Spain. And he thought it was worth spending 10,000 euros to get ahead. Maybe it would turn things around. Today, in Cuba the ’saint’ costs a foreigner between 3,000 and 4,000 euros. Depends on the saint or orisha.

Olga, an experienced santera, clarifies that it costs the same to take Eleguá as Obatala. Or Shango. For outsiders like Daniel an entire industry of Santeria has been assembled. Swedes, Japanese or Spaniards have a wide range of options when it comes to ’hacerse santo’. Of course, They have to bring everything from their country, starting with the white clothes.

The babalaos abound on the island. There is even competition. The State, which once hindered Afro-Cuban religions, has joined the party. And if you are not a severe critic of the regime, you may belong to the Yoruba Association.

The Association has an official site at Prado and Monte. And just by picking up the phone, they serve powerful people of the Communist Party Central Committee. The Letter of the Year** of the official babalaos is even reported in the national media.

To fall into grace, at times, the make offerings to the ’pledge’ of Fidel Castro. And they pray for the health of the old guerrilla, who by the way, these days, is rumored to be in serious condition.

Then babalaos and santeros do their thing. Make money. They have hundreds of foreign godchildren. And successful Cubans. For some time here, there has been a dissenting society of the Afro-Cuban religion. They are independent of government. And their snails speak differently from those of their official counterparts.

They are critics of the status quo. Like those favored by the regime, many babalaos have the sign of the dollar on front.  It’s their star.

“To make a saint” in Cuba is a booming business. It’s no longer seen to be a “folkloric wave.” There are party leaders, esteemed musicians and intellectuals, more and more of those who have an Eleguá on the threshold of their houses.

When things go wrong, the ’godfathers’ implore their ’godchild’ to “make the saint”. And that means spending money. There are three rates. For foreigners like Daniel the ’saint’ it is expensive. For Cubans living in the U.S. it costs more, but not as much as for a clueless Finn. For Cubans on the island, the price is cheaper. Well, it depends on what you mean by cheap.

In any event, to be ’made holy’ means two years salary for a Cuban worker. And maybe more. The reasons to go to the ’throne’ vary. Health problems. Eagerness to thrive. Even trouble with the law.

Or a fashion. People who like plenty of money are ’made holy’ to have a “protection”. “And an amulet of protection,” says Miriam, an accountant by trade.

She knows what she’s talking about. She has stolen with both hands for years now. And never gone to jail. Not even had trouble with the law. Even coming out well from a close shave with the audit performed by the group of incorruptible of Gladys Bejerano, head of the Comptroller of the Republic.

That flurry of bills falling on the Afro-Cuban religions has brought its consequences. Unscrupulous people who profit from the faith. Phonies. Crooks and hustlers. But of course there are some like Horace, a recognized babalao, who continues to respect the beliefs.

You can go to see it in a rickety tenement in Cerro. Just pay one peso five centavos for the inquiry. And you don’t have to buy a live animal. Or give him a bottle of whiskey. Or a box of Robaina cigars. If your case does not look good, according to the reading of the shells thrown, Horace will give you Arosohumbe. A saint who is free. Believe it or not.

Translator’s note:
*Hacer santo: Roughly, this is a ceremony of initiation into the Santeria religion. The initiate is not “made a saint”… rather they are assigned one.
**Letter of the Year: A letter predicting events of the year to come.