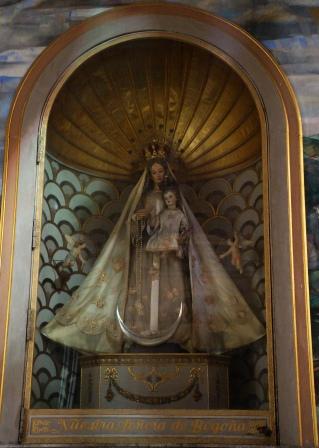 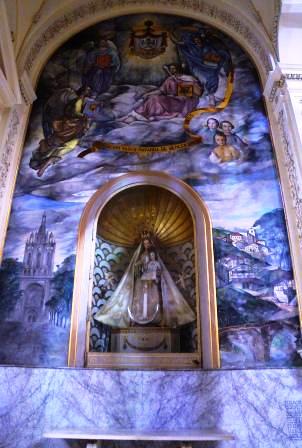 Havana, Cuba–The altar of the Virgin of Begoña is located in the ancient Church of San Francisco at the Corner of Amargura and Cuba streets in the old part of Havana.

The statue’s arrival in Havana along with the building of the altar was the initiative of the Vasco Navarra Association Charities Ladies Committee. Among the noble benefactors were Mesdames  Manolita Uriarte, Pilar Alonso, Carmen Landa, Pilar Azcueta, and Miss Chatin Isasi.  The construction  was overseen by the President of the Association, the illustrious Mr. D Venancio Zabaleta Aramburu.

The statue of the Virgin is a unique beauty with a jeweled dress and inlaid in relief.  The altar is made of marble and the wall surrounding the niche is decorated by paintings that recall the homeland which follows this devotion or worship.

The church that jealously guards the worship of the Virgin of Begoña is under the care of the Conventual Franciscan Fathers of Cuba, one of the few religious orders that have moved to the island with the approval of the Cuban government in recent years.