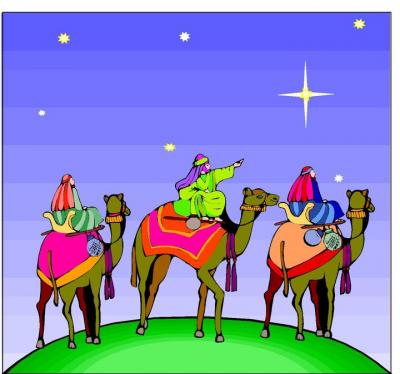 Those Cubans on the other side of 50 saw those days when we were kids disappear by the will of the Castrocracy; those awaited days of Christmas, when the whole family joyfully gathered around a properly set, well-loaded table, in a celebration more traditional than religious. Believers or atheists the end-of-year holidays were a reason to get together and share, to renew affections, to strengthen family ties.

The holidays ended at the beginning of January with the day most anticipated by the children, the Day of the Three Kings — Epiphany — when we woke ourselves early in the morning to find they toys brought by the kind Melchor, Gaspar and Balthazar. It was, as I remember, a ritual in which we went with our parents to look in the shop windows filled with bright and colorful toys during the days before, the never-failing letter to the Kings attached with great hope on the night of January 5th to the newest shoes we owned, and perhaps some gifts from us to the camels and their riders. For example, my older brother and I always put out grass for the camels to eat and a box of cigarettes for the Kings because we assumed that if our father smoked, surely the Kings did too.

If I’m not mistaken, it was the second half the decade of the ’60s when Christmas and the Day of the Three Kings were banned in Cuba. They were, according to the authorities, religious celebrations that had nothing to do with the Revolutionary and Marxist spirit of our process. Many parents maintained with great effort for a time the tradition of the Three Magi — mine among them, although they were atheists — and the government was clever enough not to eliminate the children’s party at one stroke: with the perversity that characterized they established a “standard” that would govern, for a long time, the distribution of toys so that all of us children were “equal” and so to overcome the unfair bourgeoisie differences where, they asserted, the rich kids had toys and the poor kids didn’t.

From that time every child had the right to three toys a year, one “basic” (costing more than five pesos at that time), and two “additional,” cheaper ones. Shortly after they would establish another variant and there would no longer be two additional, but rather one additional and another “directed.” This last would be a toy with very little monetary value — although in the end the truth is that the real value of a toy is what it gives each child — something like a trumpet, a packet of soldiers, a game of jacks, or a jump rope. A detail of the system, expert in limits and parceling out: toys were for children up to twelve years old. At thirteen you officially were no longer a child.

The so-called “Revolutionary Offensive” of 1968, which liquidated at one blow the last pockets of private property that survived in Cuba, also eliminated the possibility of purchasing some handmade toys sold in small little trinket shots and other family businesses. Havana, in particular, had countless of these little shops. My generation still remembers the variety of toys, for very reasonable prices, were bought in those modest establishments and with which many parents of the poorest families celebrated January 6 in their homes. Not to mention that the shops selling industrially produced toys offered something for all budgets.

At the beginning of the ’70s the official imagination introduced an even more perverse method: the draw. This consisted of a lottery based on the ration card numbers of each nuclear family that had a child between zero and twelve. Every number pulled out of the drum established the day and numerical order in which each person could buy, within the five days established for the sale of toys. Those who were able to buy on the first day got the best toys, and the unhappy who bought on the fifth day only got the leftovers.

It’s clear that by this stage the Three Kings had disappeared from the process; the toys arrived according to the luck of the drawn and we knew that it was our parents who bought them in the stores assigned to them. Another delicious detail of the system: they implemented a “Children’s Day,” celebrated in July, as a replacement for the traditional Three Kings Day on January 6.

But behold, the traditions and dreams can outlast any dictatorship and remain planted in the deepest cultural memories of a people. For several years now, without any official measure of approval, Cuban families have restored that peculiar monarchy of the Three Kings and it is now a rare home where the children don’t celebrate January 6. Melchor, Gaspar and Baltasar have returned, although with them they have also recycled the perversity of the system.

Now the shops of the Castrocracy offer toys, always in hard currency, for those parents who can buy them at the exorbitant prices on display Of course, there are no longer “basics,” “additionals” or “directeds”; there are no lotteries nor assigned coupons. It seems the government has already forgotten its aspirations for egalitarianism, but the facilities that existed long ago, when there were toys for every budget, have not been restored.

As for me, I welcome the return of the Three Kings, who ultimately never left the popular imagination. It’s too bad that now the Cuban dictatorship, in its never-ending cynicism, is using them for personal gain.