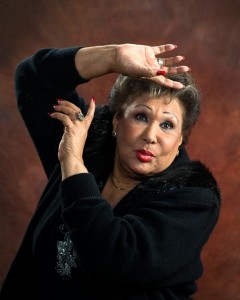 Amidst Cuban flags, famous boleros, and white flowers, thousands of exiles and hundreds of Latin Americans bid farewell to Olga Guillot on Monday, July 12th. On Friday Guillot checked in to the Mount Sinai Hospital in Miami, that city where she lived in and occasionally performed ever since the 60’s, although Venezuela and Mexico were her first sanctuaries after leaving Cuba in 1961, while her voice still filled all the radios of the country.

Olga Guillot was dubbed the Queen of the Bolero, the Actress who sang, and the Latin-American Diva, among other titles awarded in her 60 year career, half a century of CDs – 14 of which went gold and 10 platinum- roles in dozens of movies, numerous tours around the world, and her nostalgic declarations about the freedom of her native island, where she achieved success at only 16 after performing on the show called The Supreme Court of Art. She also was part of such vocal groups like the Siboney Quartet, until she debuted as a solo artist in 1945. She achieved her first international hit when she recorded “Mienteme” (‘Lie to Me’), a song by the Mexican Chamaco Dominguez.

Olga Guillot, who was born on Trocha street in Santiago de Cuba on October 9, 1922, took the bolero all over the world and to new levels with her brilliant interpretations of such classics like “Mienteme”, “Tu Me Acostumbraste”, “La Gloria Eres Tu”, “Lagrimas Negras”, “Soy Tuya”, “La Noche de Anoche”, “Palabras Calladas”, and “Eso y Mas“. During her artistic career she shared stages with such names as Rita Montaner, Beny More, Nat King Cole, Sara Montiel, Edith Piaf, Armando Manzanero, and Jose Jose (who always referred to her as his artistic Godmother).

Like Celia Cruz, Cachao, and other legends of popular Cuban music, Guillot did not get to return to the island, a subject which always came up in her success and in her frustrations. Nostalgia marked her human and creative existence, but such artists like Malena Burke, Annia Linares, Vicky Roig, Emilio Estefan, Tito Puente Jr., Meme Solis, and Roberto Lozano, continue evoking her charisma and solidarity through their art.

Despite all the international fame and success achieved by this great artist, her name and her music were both erased from the Cuban music scene. The state censorship was so deep that for three generations of Cubans, the recordings of the Queen of Bolero is limited to nostalgic references made by parents and grandparents.

While in Miami they are saying goodbye with flowers and flags to the first Hispanic artist to perform in New York’s Carnegie Hall, in Cuba some of us music lovers are starting to search through our old acetates of Guillot and we ask our relatives in exile to please send us some recording of that one and only Diva, similar to Rita Montaner, Beny More, and Celia Cruz.

The death of the female voice behind the bolero could serve as an excuse to retrieve the musical and human legacy of Olguita Guillot and pay tribute to her on the other shore of this island divided by foreign passions of national art and culture.