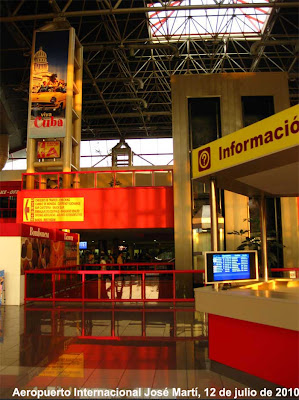 The last days have been dizzying, torn between joy and uncertainty. I didn’t say goodbye to Pablo Pacheco because he sneaked out of the country, I haven’t been able to talk with Pedro Argüelle and I still have my eyes fixed on the image of Fariñas, frozen in the moment when the grimace on his face proved that to take a sip of liquid was, for him, Pure Misery.

I felt a little disconnected, running here and there, from Pinar del Rio to Santa Clara, finding out about everything going on through a flow of text messages that we managed to keep going between some friends. I have seen many people with the faith that one day we will live in a free country, I was struck by the network of solidarity outside Coco’s hospital, a score of his loyal friends and colleagues desperately watching the ups and downs of his health, turning to the clueless, like me, who arrived three hours before the visit, bringing everything they have, and that is: almost nothing. I sincerely regret that not a single journalist has taken the trouble, until now, to talk with these people who for four months, silently, have cared for the life of the freest man in Cuba.

It is sometimes unsettling to see so much courage and the kindness in people, like the mother of Fariñas, and so much indolence and hypocrisy in articles like this*. There are times when it is preferable not to connect to the Internet.

It bothers me deeply, horribly, to see the sleight of hand that has been shown to the voices of civil society in pursuit of a policy so opportunistic towards those who live in my country today: the release of the innocents. At what point in history was the dialog between the Church and the Cuban government, and with Moratinos left as mediator? When will the prisoners who want to live in Cuba be released? Why, in an international airport, don’t “free people” board the plane like the rest of the passengers? If they can come to Cuba whenever they want, why couldn’t they say goodbye to their friends today, or stop and have a cup of coffee at home before leaving the island?

Today for the first time I saw José Luis García Paneque’s face in a photo on the Internet, my feelings are indescribable, this post would become absurd if I indulged all my questions. I hate to say this, but so far only one word describes the achievement of this unique dialog that excludes the protagonists and victims of one of the two parties: Exile.

When at least one of the ex-prisoners of conscience released in Madrid puts his feet on Cuban soil again, when Pedro Argüelles, Eduardo Díaz and Regis Iglesias are in their homes, when the laypersons Dagoberto Valdes and Osvaldo Payá are invited to the negotiations between the government and the Catholic Church, and can express their opinions on equal terms, then we will be engaged in DIALOGUE; until that time we are only talking about concessions, convenience and emergency exits.

* Translator’s note: The link is to an article, in Spanish, titled, “Dissident Cubans in Spain Face an Uncertain Future”