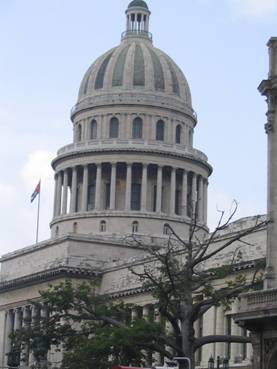 Recently, in the face of the decline of “the model,” many political scientists that deal with Cuba have been given the task of preparing projections for the new Cuba. As should be true, the opinions are varied, depending on the ideological and political slant of the speakers. But one thing is clear: the new Cuba will face several critical issues. Among these are: achieving a peaceful transition, without winners or losers, avoiding violence; establishing a democratic system with broad participation of all political and social viewpoints; creating a new state with all its institutions; and building an efficient economy.

The demolition of the ruins of the model such as it is, built on the base of volunteerism, is not a very difficult task, because by now it has practically been carried out in all material respects. The difficult task at this point is to make sure that the majority of those who have been part of it, with varying degrees of commitment, are able to understand and accept that change is absolutely necessary to insure that the nation survives. And also, that the victims of the model (here I include the exiles), marginalized and repressed for years, do not place revenge or settling accounts as priorities at the negotiating table. A compact, setting aside special interests before national, is the smart thing, which does not mean forgetting, or that those responsible for the national tragedy remain unpunished, but this should be achieved by public consensus, in the short term, and within laws enacted for that purpose, without witch hunts and mass purges. All of us, to one degree or another, for over five decades, have been involved in what has happened, and we have different degrees of responsibility, if not material at least moral. What would be impermissible and suicidal would be a fratricidal fight.

The full participation of every citizen in the political task of the nation should be a respected and protected right. This will lead to establishing the freedom to join together and form organizations of different political and social stripes for developing and proposing government projects capable of pulling the country out of the economic, political and social chaos into which the current model has sunk us. Therefore, the establishment of full democracy is an inevitable foundation.

It is necessary to create a new state. This is probably the most complex and difficult task. The existing model, with its institutions and organizations created on the fly, was built by systematically dismantling the existing democratic state in the Republic, and was conceived with purely ideological interests for maintaining power at all costs. For this reason, the Constitution, laws, institutions, and organizations all settled into the socialist straitjacket, inventing ponderous control apparatuses and propaganda at all levels, and even parallel governments within the government, superseding or multiplying their functions. A completely new, modern, and efficient state is required, with new laws and institutions, which continues and perfects what existed before 1959. For this new officials are needed, who are more professional than political, with a different ethic. This is not the task of a day or a short time, but must be tackled at an early stage, otherwise the rest is doomed to failure.

The establishment of a democracy is inextricably linked to the creation of an efficient economy. We must understand that without democracy there is no economy, and equally that without the economy there is no democracy. All current attempts to address these two categories have failed. A free, competitive economy is only possible in a democratic regime that respects the rights of all social entities, and where there are no obstacles to the free development of individual initiative. Similarly, a free and efficient economy strengthens democracy, facilitating the exercise and implementation of laws and social programs that provide real answers to the needs of the population.