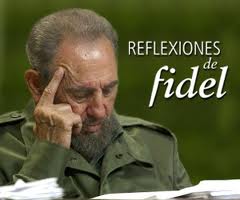 By law of life the good the bad and always have their end, each passing year we approach more closely the democracy desired by all. In the Reflections that Fidel Castro writes, he refers to his great Empire still standing but underpinned with senseless lies, causing it to crumble like Havana.

You see the pride of his fantasy and the usual manipulations, such as the versions that the island has not been anyone’s colony because he prevented it. Sure, if he prevented something it’s not what he refers to in the text but human rights, democracy, freedom and full legislative transparency.

After advanced age when you lose the sense of things, the notion of right and time, he hasn’t realized that even he has been the victim of his ingenuity as a ruler, looking around all the places he visited at some point, we observed the manipulation by his staff, forst level cadres and indispensable leaders, as he hid the truth of the situations of the localities, businesses, sports centers, citizens of the island. It even hurts me! To see this still naive man torn by his creation.

Hearing the name of Fidel Castro Ruz will, for a few, call forth pride, for others hatred for their pain, others will say… that was one crazy-idealist who didn’t know what socialism was… or the world will say that this was a rotten man who fell from tree of hell.