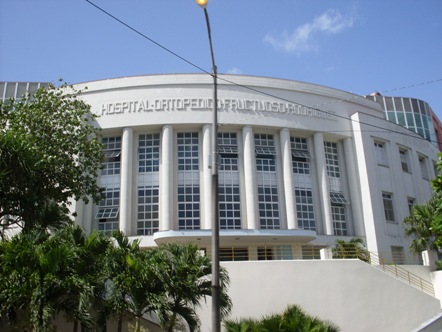 Fefa, my friend Gisela’s mother, was run over by a motorcycle as she was attempting to cross the street without paying enough attention. In her tumble, she fractured her hip for the second time in two years. Admitted to the hospital, doctors decided not to operate again without waiting to see if putting a cast on her hip and ordering full bed rest would heal her broken bones.

All of that first stage went on smoothly; Gisela would go to the hospital from home, food in hand, and would stay the night with her mother, in case Fefa needed a bedpan or to reposition herself in bed; full rest was mandatory.

When the doctors decided to release Fefa from the hospital, real problems began to arise. As Fefa still requires absolute rest, Gisela needs eighty “national” pesos* to pay for an ambulance to carry Fefa to each of her medical appointments, and eighty more to take her back home. One day, she even had to pay a hundred, because the ambulance staff consisted of three people. It is a free service, but since Gisela already went through this with the last fracture of her mom’s hip, she knows what it’s like to request the service only to be left waiting for the ambulance and lose her turn at the hospital.

The ambulance staff will provide the service of carrying a patient upstairs if needed, as is their case, as they live in a second floor apartment. If, at the appointment, an x-ray is required for Fefa, Gisela will have to “thank” the staff by paying them twenty “national” pesos for a someone to place Fefa on the X-ray table and take her off again. And she always takes a snack for the doctor and a “little something” for the nurse who controls the order of attendance, so she won’t make them wait for too long.

When Fefa fractured her hip the last time, anytime a medical appointment was made, Gisela would agree with the doctor on a time, and for ten Cuban convertible pesos* he would come to the house with a nurse, after which Gisela would take her to the Physiotherapist. Back then , Gisela’s daughter, who runs the household, had no fear of being unemployed. Now things have changed, and they must go through sacrifices to make ends meet. Poor Gisela, completely worn out by all of this, told me: “Make sure you have savings, in case you need to go to hospital!”

Translator’s note: Cuba has two currencies. A “national money” peso is worth about $ 0.04 U.S. and a convertible peso is worth roughly $1.00 U.S. Wages are paid in “national money” and rarely exceed the equivalent of about $20.00 U.S. a month. Pensions are a fraction of that. Thus, the “price” for the doctor and a nurse to come to the house is about two weeks wages, or an entire month’s pension.