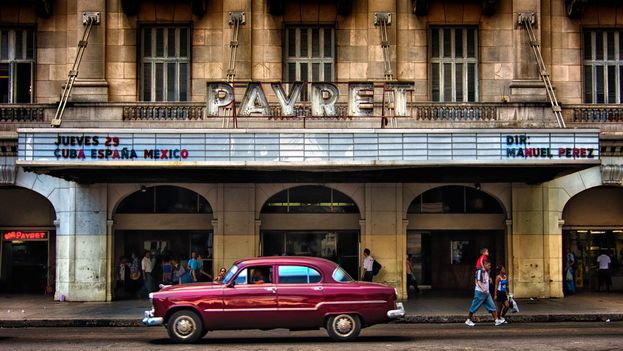 14ymedio, Havana, 21 December 2018 — After days of intense controversy, the Ministry of Tourism Director of Development, José Reinaldo Daniel Alonso, has had to respond to the speculation about Payret cinema in Havana. “It will be studied, it will be seen and decided, at the appropriate time, if the cinema stays or not,” the official said about the possibility of being its converted into a space for tourists.

After the publication of an article in the digital newspaper Cubanet warning about the remodeling of the whole block where the movie theater is located and the demolition of the Kid Chocolate sports center to build the Hotel Pasaje, an avalanche of criticism emerged in the social networks and it has only been increasing with the passing of days.

A sign a few yards from the movie theater announces the site of the Manzana Payret Complex and the Hotel Pasaje, which are being built to commemorate the 500th anniversary of the City of Havana. On the signboard you can read a phrase from Eusebio Leal, Havana City Historian, in which he says he does not hold a grudge against the past but believes in the need to “go to the future from the past.”

The adversaries of the idea claim the patrimonial value of the Payret, founded 142 years ago, and the need to preserve the property as a movie theater in view of the notable decrease in such places in recent years. Critics are also wondering if the Ministry of Tourism has the power to determine the use of the building.

“We are not going to violate anything that is established,” press official Daniel Alonso responded on Thursday. The tourist investment project linked to the Payret cinema is still under study and must first pass “all the controls” necessary for its approval.

The old property is listed as available in the portfolio of foreign investments, which total 300 million dollars made available to foreign entrepreneurs. The project is a few yards from Central Park and in front of Havana’s famous Capitol building, a tourist area where several new hotels have recently been inaugurated, including the luxurious Manzana Kempinski.

Among the voices most critical of converting the theater, inaugurated on 21 January 1877, into a tourist site, had been the singer Haydée Milanés, who on her Facebook page asked if they are going to turn the Payret into a hotel and claimed: “We can not allow it!”

The writer Norge Espinosa also expressed his dissatisfaction in Café Fuerte and noted that “an intelligent restorer, capable of understanding that the new use of a values heritage site (as is the Payret) must also protect its history, could restore it as a arena, and this, at least, it would alleviate the loss of other things around it.”

“They are turning our city into a theme park of socialism for tourists,” one reader denounced in a comment.

Ernesto Estévez Rams, another reader, labeled Daniel Alonso “arrogant” for his statements and called for a “collection of signatures” so that those “who are affected can have a local or provincial or even national consultation to democratically decide on a path” for the fate of the Payret.

Currently the cinema has been closed for several years and both its interior and its façade have suffered an accelerated deterioration. The marquee shows rust stains, the walls are blackened by soot and the interior carpentry has been destroyed and systematically sacked, some of the signs of its fall from grace.

In its almost century and a half of existence, the Payret has undergone innumerable architectural adaptations and traversed periods of clear decline, but since the 1950s it has become one of the most iconic cinemas in Cuba.

With a cabaret located on the lower floor, rounded staircases that attract the eyes of everyone who enters and a projection room adorned on its sides by a sculptural complex of nine muses created by the artist Rita Longa, who also made the The Illusion piece located in the lobby, the building is also an architectural symbol.